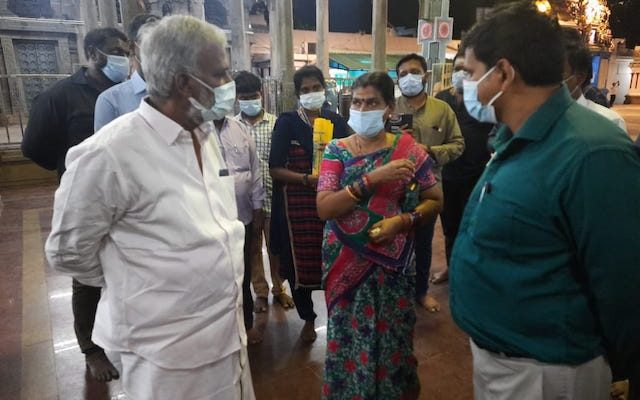 This service will be inaugurated by the HR & CE minister at 4.30pm on Thursday.

Speaking to Mylapore Times after the inspection, the minister said that on pradosham evenings when there is a huge crowd, devotees can sit in the huge open space along the Navarathri mandapam and watch the Nandi abhisekam on the LED screen.

He also said that the LED screen will display highlights of the history of the temple, upcoming events and video recordings of past events.

On the issue of  requests made by devotees to allow entry into the sannidhis of the swami and ambal, the minister promised to consider this request soon.

In another development late on Wednesday evening, the barricades on the northern side of the prakara have been removed.

The temple’s executive officer Kaveri said that people can, after having the darshan at the Ambal sannidhi, move freely around the prakara to the Go Shala and to the Saneeswarar sannidhi. She also said that on the LED screen, live and recorded visuals of  utsavams / rituals will be telecast.

Over the last month, devotees have been permitted only to go through the barricaded path from the entrance to the exit.

One Comment on “Thamizh archanai at Sri Kapali Temple: minister to  launch it on Thursday evening”