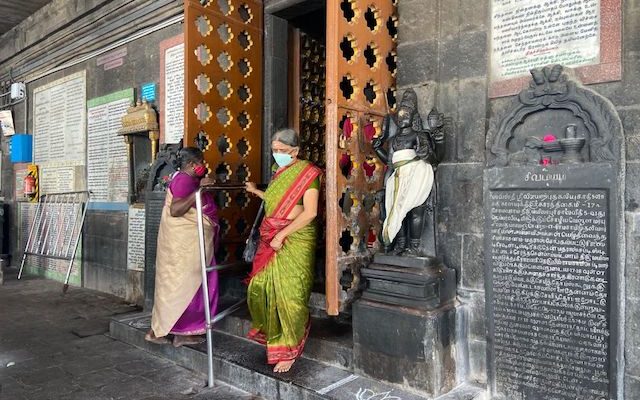 Regulars at Sri Kapaleeswarar Temple this Wednesday morning presented a petition signed by 20 of them to D Kaveri, EO of the temple.

In the note, the devotees said that they have been regulars at the temple, both in the morning and evening including at the Artha Jaama Pooja at 9pm.

In the petition, a copy of which is available with  Mylapore Times, they have said that ‘the vibration has been missing in the last few months as they have not been allowed into the sannidhi.’

They pointed to the fact that at another large HR & CE managed temple, Sri Parthasarathy Temple in Thiruvallikeni, devotees have been allowed into all the moolavar sannidhis in the last couple of weeks. The devotees were able to have darshan of Pavitrotsavam that ended last evening at that temple.

While thanking the Sri Kapali Temple administration for allowing devotees on Tuesday into the Moolavar Sannidhi, they requested the EO to permit devotees into the sannidhsi from Monday to Thursday instead of just on one day in a week.