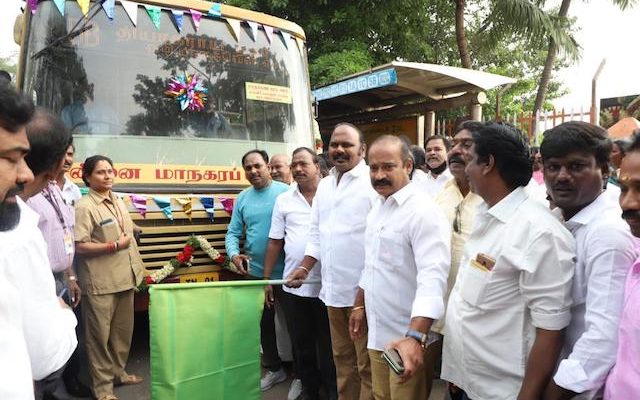 There were a few smiling faces all around this sparsely decorated MTC bus parked by the R. K. Mutt Road side on Tuesday morning. And when the informal stage was set, Mylapore MLA Dha Velu waved a green flag – to wave on a revived route.

Route 5B is back. Since this morning. The very popular service for Mylaporeans and T. Nagarites was suspended some years ago but some commuters kept asking for it and finally, MLA Velu says he could get the transport minister and MTC to resume the 5B service.

This morning, DMK cadres, present to cheer the MLA crowded into the bus to share sweets and shoot photos before the bus was emptied to rush off to T. Nagar where another launch was being readied.

The news of the restart of the 5B service brought forth many memories for people who took this route to commute. Most Mylaporeans used the service in the 70s and 80s to go to school or college/ to IIT or CEG or the polytechnics in Taramani zone. Others took it to shop in T. Nagar and visit relatives in Mambalam. And others took it to travel towards Tambaram. For many, it seems 5B was a essential and lifeline.

Over 50 people have posted on the Mylapore Times Facebook page their memories on route 5B, including a hilarious anecdote that Cho Ramaswamy and Neelu used to share.

Here are a sample –
Said Gopalswamy Ramesh: I used to take 5B from IIT gate to Mylapore.
Said Ramakrishnan: Crazy Mohan used to be nostalgic about this route by which he was commuting to Guindy Engineering College
Added Jagadeeswaran: This is a short route but was useful in my college days ( 1976 – ’81)

It is not clear if 5B now is a ‘ordinary’ or ‘deluxe’ service and going by many comments, people would like it to be a ordinary service that touches all bus stops since it is essential for lots of people.