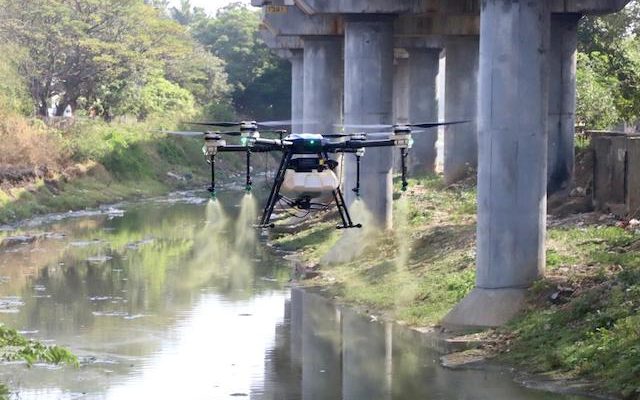 State minister for municipal administration was near the Greenways Road MRTS rail station zone this Monday morning to launch a drone-led campaign to tackle the mosquito problem in this area.

This anti-mosquito campaign by Chennai Corporation has been doubled now after the problem has got severe, with people complaining from across the city.

The city’s civic body is using drones to spray insecticide on stagnating dirt water and sewage in areas like the Buckingham Canal that runs through the Mylapore – R A Puram zone.

GCC commissioner Gagandeep Singh Bedi and Mylapore MLA Dha Velu were present when this operation was set in motion.

Civic staff have been asked to carry out spraying in sewage lines and in colonies where the mosquito problem is severe, which is mostly in areas along the banks of the Canal in Mylapore.