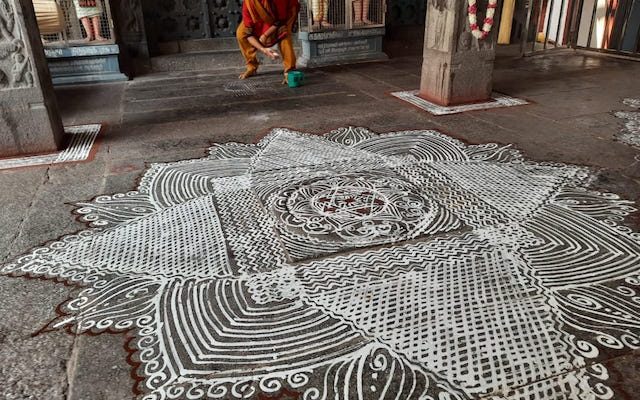 For Uma Ganesh, a longtime resident of Mylapore, it was the first opportunity to draw the inaugural kolams ahead of the Panguni utsavam at Sri Kapaleeswarar Temple.

She says she has been drawing kolams at Puttaparuthi for close to three decades but did not get the opportunity to draw big kolams at the Mylapore temple at the Panguni utsavam time.
The person who used to design the kolams at all utsavams had moved out of Mylapore and thus Uma was asked if she would be interested in drawing kolams at the Navarathri mandapam where the pancha moorthis would make their way out on Wednesday morning ahead of the first procession after the hoisting of the flag.
This Tuesday morning, for three hours, Uma Ganesh designed six beautiful, large kolams.
– Report and photos by S. Prabhu