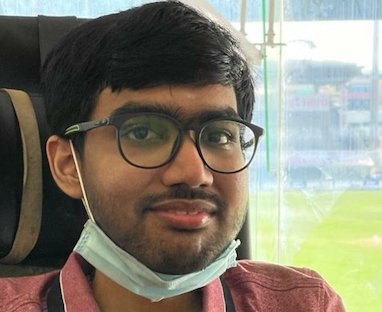 Kausthub Swaminathan, life-long resident of Mylapore passed away on March 21. He was 23.
Son of ex-banker Suresh and Viji Suresh, residents of Luz Avenue in Mylapore, Kausthub was an ardent sports enthusiast.
Although he was wheelchair bound due to his lifelong battle with DMD (Duchenne Muscular Dystrophy), his indomitable spirit enabled him to carve a niche as a sports columnist in online portals such as Sportskeeda, CricXstasy and Followyoursport. This also provided him  an opportunity to meet and interact with India cricketer Ravichandran Ashwin, something he cherished with pride.
Kausthub actively advocated the need for better access to entertainment venues for differently abled people and often wrote passionately about it in social media.  Once, he wrote on the need for better access at the main gate of Nageswara Rao Park in Luz.
As a social media influencer, he actively straddled multiple platforms such as Facebook, Instagram and Twitter where he interacted with numerous followers  and served as an inspiration to many others.
He leaves behind his bereaved parents Suresh and Viji and his sister Deepika Suresh.
They can be reached at 4/13, Luz Avenue. Phone: 97101 64040