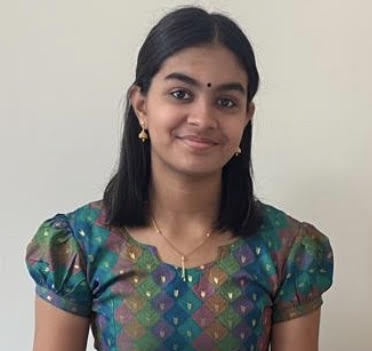 Sahana Aravind, 13 years old, born and raised in the US has been into Carnatic vocal singing from a very early age. On her current visit to the city, she presented a concert at Rani Seethai Hall on July 15.

For the past 3 years, Sahana has been training under Hiranmayee S., who hails from a family of musicians, and is a sishya of vidushi Suguna Varadachari.

She regularly takes part in the Cleveland Thyagaraja Aradhana and has learnt music from the maestros – Suguna Varadachari, Nagai Muralidharan, Cherthala Ranganatha Sharma and  A.S. Murali as well as singing for the Aradhana’s flagship Sustaining Sampradaya concert.

She was awarded the overall title winner of the Indian Raga Carnatic music competition series for the year 2021.

She also learns the Western violin at school. Sahana is academically a bright student as well. She’s the recent recipient of the President’s award at her school (highest honours for a student at grade 8) for being academically
outstanding as well as excelling at sports, arts and for being an all-rounder.

Her father, Aravind Venkateswaran was born and raised in Mylapore; his parents and siblings are all Mylaporeans.