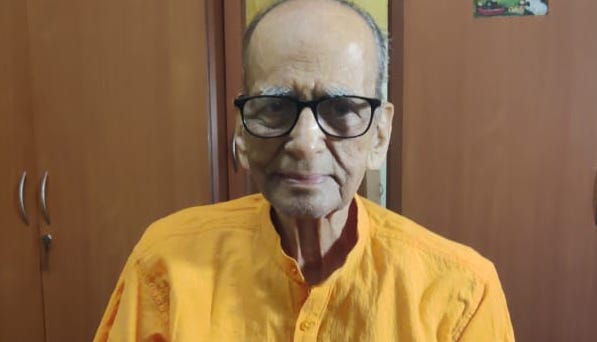 “Akashwani. Seidigal vaasippadu, Venkatraman.” This was the voice that conveyed in Tamil the momentous news of India attaining independence, from New Delhi, early on August 15, 1947. For Radio Ceylon’s 5.45 am news bulletin for South Asian countries, broadcast by All India Radio, better known as Akashwani.

The newsreader, R S Venkatraman, now a 99-year-old, is a resident of Robertson Lane in Mandavelli. He was one of the four popular voices that ruled the AIR Tamil news world for decades, alongside Saroj Narayanaswami, Poornam Viswanathan and Rajaraman.

Recalling the intense feelings when announcing the news in August 1947, Venkatraman said, “It cannot be captured in words.”

Venkatraman was with the AIR for 64 years: 50 plus years as a regular artist and 12 years as a casual artist. Not surprisingly, in 1997, AIR accorded him a great privilege. He was invited to read the news on the golden jubilee anniversary of Indian independence.

“Never did I think I would become a news reader. I went to Delhi to take up a government job. Those days, radio was a powerful medium for news and entertainment. My friend Krishnaswami from AIR organised a reading of my story, Aasai, on the radio. When I went to AIR in this connection, I was told that there was a vacancy for a script writer. I just took it up. I went on to head the Tamil news section in AIR,” he recalled.

Venkatraman’s granddaughter is an RJ with Radio Dhool.

<< Report by Kanaka Cadambi:  Inputs for this report were from daughter Manorama Ganesh Kumar.