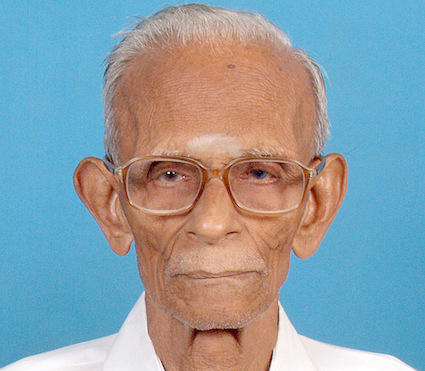 J. Sanjeevi Rao, aged 92 years a Mylaporean  expired on Sept.28. He was the father of The Mylapore Trio – Aparna, Surendranath and Amarnath.

. He was born and brought up in Nallappan Street, Mylapore. He was an alumnus of P. S. High School (1947 batch) and Vivekananda College (B.Com) Mylapore.

In his youth, he was a close follower of Rajagopalachari. He and his friends  in Mylapore founded the ‘Madras Youth Culture’ group at Mylapore in late 1950s through which it promoted cultural activities.

He was a talented script  writer, director and actor of plays. He was one of the founder members of the Mylapore Academy and involved himself in social service activities.

He worked in the Postal Audit Department: after retirement, he became the founder secretary of  “Bharathi Pasarai” at Mylapore and promoted Bharathiar’s works.

His belongs to a family with a hoary past. His maternal uncle was Dr. Krishna Rao Shelvankar who was India’s Ambassador to Moscow, Hanoi and a special correspondent of The Hindu in London.