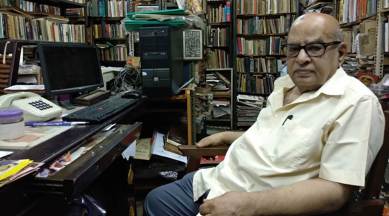 R. A. Puram’s senior resident, S. A. Govindaraju, well known for being a collector and seller of choice old books, documents and clippings, passed away in late October, after a prolonged illness.

He studied law and went on to be a legal consultant to small and big companies, mostly working from his house on R. A. Puram’s 2nd Main Road, close to Billroth Hospital.

This house was owned by Govindaraju’s father, a doctor – Audhinarayana Raju.

Govindaraju’s son, S. G. Mahesh says his grandfather used to buy and preserve books, mostly Penguin publications and that his father followed in those steps and expanded his collection.

Govindaraju used to collate and collect clippings and pages from newspapers which carried either landmark news and features or photo features and unique advertisements. He went on to collect a variety of books, on all subjects.

His son says Govindaraju gave up his active consulting work in 1988 and converted the garage in the apartment block ( the house had been sold to developers some years earlier) into his Rare Books nook.

Visitors to the nook were people who were also collectors of all kinds and Govindaraju could easily ferret stuff they were looking for. He also took part in events on Madras and heritage, showcasing some of his theme collections – one being on English adverts released in local newspapers through them early 1900s.

He began to sell most of his collection in recent years, and most of it after he fell sick last year. Only little is left in the nook now.