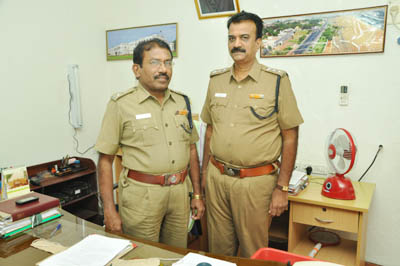 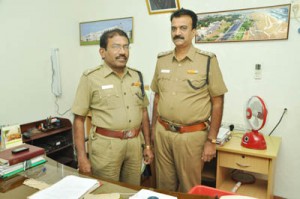 Two police officers who now serve the Mylapore district have been chosen for national honours on the occasion of Independence Day.

Deputy Commissioner T K Puhalenthi (seen on left) who heads the Mylapore district in Chennai has been chosen for the President’s Police Medal for Distinguished Service.

Assistant Commissioner P Ravisekaran (seen on right) who is in charge of the Mylapore neighbourhood has been chosen for the President’s Medal for Meritorious Service.

The news came even as the officers were engaged with the annual Independence Day events in the city.

Their offices are located in the Mylapore Police Station campus on Kutchery Road, Mylapore.

T. K. Puhalenthi (56) was made Deputy Commissioner of Police of Mylapore zone on September 9. He was previously the DCP of Triplicane zone.

A native of Kanyakumari he was the Additional SP in Tirunelveli before being promoted to the DCP rank.

He has been in service for 36 years.

He received the President’s Medal for Meritorious Service some years ago.

“To receive the President’s Police Medal for Distinguished Service the police officer should have received the Medal for Meritorious Service,” he says.

Apart from that he has also received the Chief Minister’s medal.

This officer has served in most of the districts in Tamil Nadu.

Of the many tough assignments he handled, he recalls a riot at Mandaikadu in Kanyakumari district which broke out between Christians and Hindus.

” We had a tough time bringing it under control,” he says.

Another important milestone in his career was when he was in the CID Department and the team had to probe the bomb blasts in Coimbatore.

“We had to gather lots of intelligence and it was a challenge,” says Puhalenthi.

P. Ravisekaran (49) was made Assistant Commissioner of Police, Mylapore Zone in June 2011.

He has been in service for 24 years. He holds an M. Phil degree and is a native of Tanjore district.

He received the Chief Minister’s medal in 2008.

“I was posted in Tanjore when the demolition of Babar Masjid took place. A riot started off here and we had to play peacemakers,” he says.

He says he has solved 37 murder cases.

Ravisekaran is also a writer and has penned a few books.

Their offices are located in the Mylapore Police Station campus on Kutchery Road, Mylapore. Ph: 2345 2562.