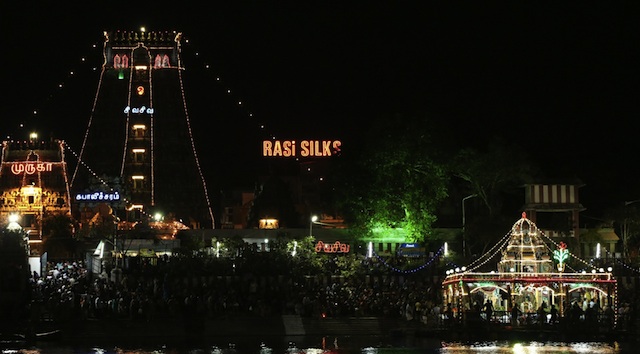 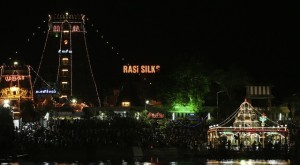 A teppam festival fascinates people and on day one of the festival of Sri Kapali Temple in Mylapore there were thousands of people who streamed in and out of the temple tank off R K Mutt Road to participate in it on February 3 evening, a Tuesday.

As the float did the mandated five rounds of the tank, close to the water line on all four sides of the tank, people who sat or stood on the banks had a brief glimpse of the gods – lord Kapaleeswarar and his consort – and said a brief prayer before walking out of the tank and heading home.

It had been a very quiet Tuesday evening, not much of a hint of a festival to unfold – that was at about 5.30 p.m. People walked into Sangeethas for a cup of coffee or a light tiffin, early shoppers picked up some veggies and women picked up flowers from hawkers seated along the tank side on South Mada Street.

And then, at about 5.45 p.m. the music of the nagaswaram and scattered notes of a three-piece brass band floated down the mada veedhi and that caught people’s attention even as some others pulled out their mobile phones to shoot pictures. The mobile floodlights system seemed to have failed so the gods, seated under two giant umbrellas were dulled by the fast-fading light of dusk. For those who wished to make an offering, the procession stopped briefly every few metros.

Traffic, that had picked up on the main road roared crazily, trying to outpace the procession till the local police brought some order. Shoppers at Khazana and Sri Murugan stepped out to gawk. In minutes, the procession entered the main gate of the tank, on the R K Mutt Road side and the gods were taken into the illuminated float and the first set of rituals followed.

The steps on all sides of the tank began to fill up and as the float began its first round just a shade before 7 p.m. A few people walked down to the water’s edge and lit karpooram, some setting it afloat in the water.

All around us, the illumination, strung on all four sides of the tank, in the central mantap and on the eastern gopuram of the temple created a colorful tapestry in the disturbed waters even as the ‘thai masam’ moon rose into the north eastern skies, a bit hazy at this time of the evening.

Big-built volunteers who walked along the tank’s edge, pulled the float on its journey, using giant thick ropes even as two police patrols in inflatable floaters kept an eye from the water, at the ready to respond to any accident. Alongside the float, ducks which have made the tank their home for years now preened and swam in bursts, trying to gain some attention of the children in the crowd.

The second round of the teppam took 19 minutes. This was an orderly event and though it was a weekday, the attendance was big, mostly women and children. 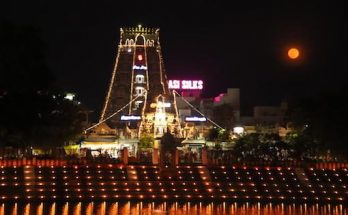 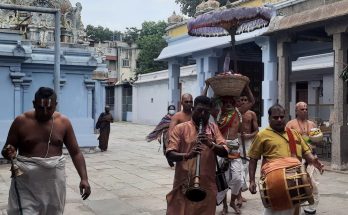 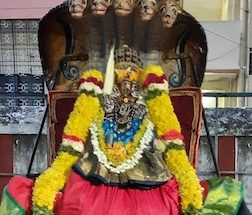