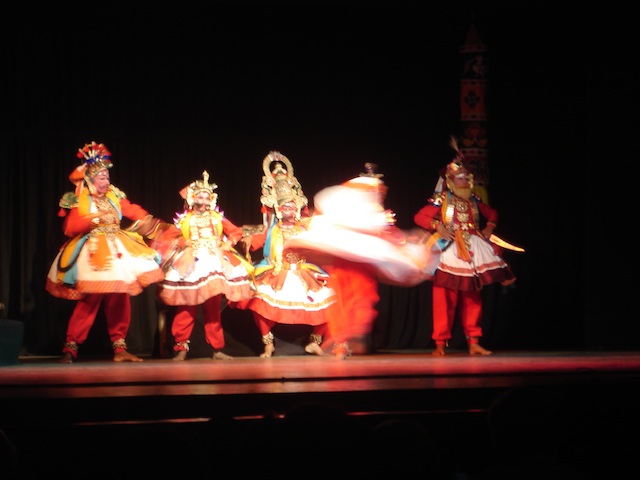 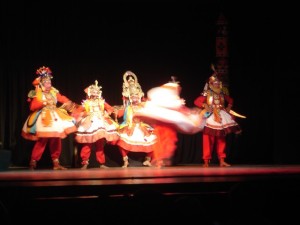 If Mylaporeans who have done all the plays since the 60s and 70s and watched the masters and the best can be motivated to come out and watch new talent, then they and you may want to watch the Kattai Kuthu play ‘Draupadi Kuruvanji’ which is being staged the past two days and will be on for 2 more days at Narada Gana Sabha. This play presents young professionals of the Kuttu Kalai Kudam in Kanchipuram run by guru P Rajagopal and his wife Hanne.

On Saturday, the teens wowed the audience of about 300 people for about 2 hours – the team can perform through the night. One person who swept us off our feet was a teeny-weeny boy, Ilavarasan who plays one of the two kattiyakaran. He showed us he could perform any role of that evening but excelled as the sidekick hero.

He and all his 20 odd colleagues also showed us the huge amounts of energy and spirit that they have and transmit when on stage – off it, when we met some of them they stood with folded hands around their guru, Rajagopal.

One must thank theatre company Shradha for presenting the Kuthu form at city sabhas. This is a new attempt – four sabhas are presenting each evening’s show and one wished alls abha members came by – many seniors left midway, perhaps finding the breathless performances of song and dance too much used as they are to music concerts. But freelance writer Gita Iyengar who stayed till the end said this was a impressive show and should have been staged in the open.

Hosting folk arts in the sabha circuit – works or does not? Shradha may well be wanting to know.