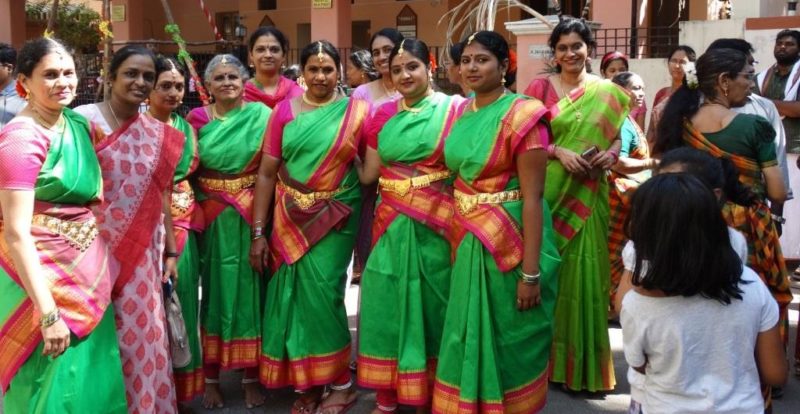 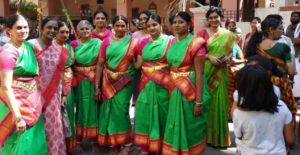 The event started with a kolam competition. 12 teams of 5 members each drew kolams based on the theme ‘Pancha bootham’ depicting the five elements of nature in creative and colourful ways. The event was judged by documentary film maker Radha Alphonse and kolam experts Manuvidya and Vaidehi Shivakumar. Teams Karpagambal, Dwaraka and 6th element bagged the first, second and third prizes respectively. The youngest team – Chennai Sharks were given a special prize.

Later, a pongal celebration was held which was inaugurated by Mylapore MLA R. Nataraj. Cultural events followed next with a choral music performance by 25 singers and a kummi dance (seen in the picture) by the students of Atmalaya led by their teacher and resident of Raja Street, Uthra Ramesh.

An uriyadi function was then held wherein the residents, including women and children, tried their luck at breaking the pot. The audience enjoyed misleading the blindfolded participants who tried breaking the pot with a long stick hoisted on a tall tripod. The pot was finally broken by the president of the association, Kanti Neelamekam.

Residents from neighbouring streets – Velayutha Raja Street and Raja Street Extension and from other areas – Norton Road, School View Road, Mylapore and Mandaveli too participated in this event.

The festivities ended with the distribution of pongal and sugarcane juice to all the attendees.