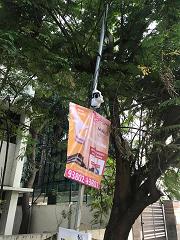 The members of the Sriram Nagar Residents Association, Alwarpet have set up a CCTV surveillance camera network in their neighbourhood.

11 HD (high definition) night vision cameras will monitor the area round the clock and digital video of the same will be recorded at two secured spots.

The project will be officially inaugurated on April. 14.