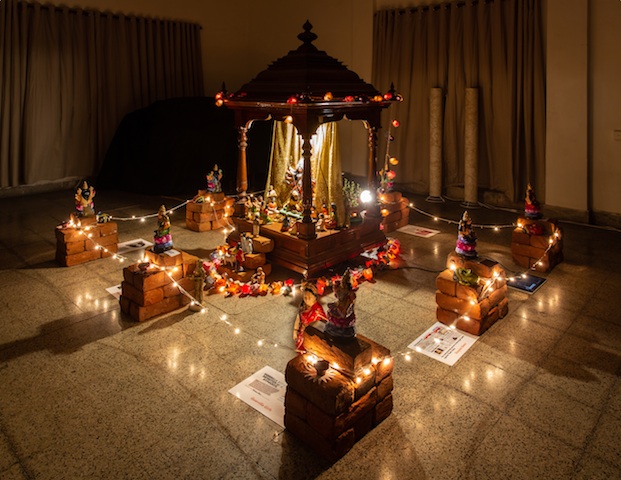 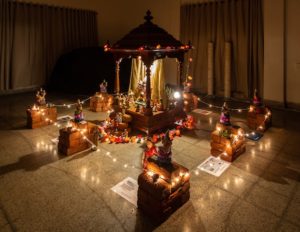 Every summer, Archana Ramkumar, Sreenag and Shreya Nagarajan (residents of Judge Jambulingam Street, Mylapore) start thinking about their Kolu and what they can do differently.

Over many weeks of mulling over concepts and ideas, a plan starts to come together. After their 2017 Kolu titled “Chicagolu”, they decided on a theme that would stand apart and inspire conversation.

This year, the theme was The Woman Divine. Says Shreya, “With so much happening with the #metoo movement and people constantly not believing women, we felt the need to compare these courageous women to the Goddess and highlight the idea of every woman being a representative of the divine. So we curated a circular golu, doing away with the traditional steps. The focus was on the woman, for her strength, resilience, beauty and valour, and not her association to any man or spouse.”

There was a central mandapam, divided into two scenes: one was Durga, the goddess who possess ultimate power and won a war because of her feminine strength and the second was ‘the ultimate single mother’, Sita, raising her sons Lava and Kusha in the forest. The circle around the mandapam comprised of the Ashta Lakshmi and the team developed a thread which compared each Lakshmi with contemporary women of today.
As gifts to guests who visited the kolu, the family had purchased Cheriyal painted faces. The faces and keychains were ordered specially for the kolu from artists Vanaja and Ganesh in the village of Cheriyal, Telangana. They are said to be the last surviving family to keep this traditional art alive.
Photo credit: Sreenag Pictures