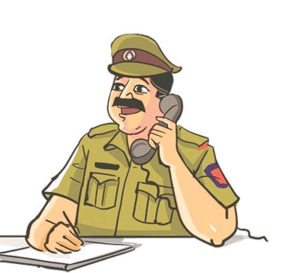 Sujatha lost her purse on June 13 at Spencers supermarket. The purse had some Rs. 2000 in cash and original driving license, an RC book and bank cards.

Soon with the help of the store’s CCTV footage, she identified that her purse was picked up by an old man. She then recorded the footage and went to file a complaint at this police station

Says S. Gyanaprakasam, writer at Abhiramapuram police station, “Immediately after we received the resident’s oral complaint, Subinspector Karthik Raja and Head Constable Sundar extended their work hours after COVID-19 duty and took up the case. With the help of the streetside CCTV cameras, they kept tracking the movement of the old man after he left the supermarket.”

This was possible as all the streets he walked had cameras. Finally, the old man entered a house at Alwarpet, where he was working as a security guard. Our team quickly went there to collect the purse and handed it over to its owner on June 14, he says.

The writer says that the old man was 70 plus. “On enquiring, the senior apologised for his actions. So we let him off after he took a written undertaking that he would not repeat this offence again.”

When asked how they manage to carry out their work in spite of having COVID-19 duty, “It is very important for us to serve the public even during crisis times. Following lockdown, we are regularly asked to monitor quarantined houses/ containment zones. Due to that, it does get a little delayed in solving such cases. But we do our best and solve them as soon as possible.”

One Comment on “Despite COVID-19 duty, how local police solved case of Abhiramapuram resident”