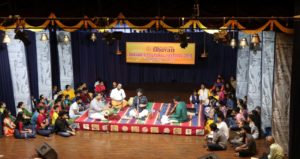 Though the Tamil Nadu state government on Saturday ( Nov.21) issued orders to allow outdoor and indoor cultural events like concerts and dramas with certain restrictions, sabhas in Mylapore are not exactly excited at the prospects.

The sabhas under the banner of a federation are not keen to think of curating their annual Carnatic music and dance festivals in December for what is popularly called the December Season.

Harishankar of Narada Gana Sabha based in Alwarpet says that the federation is already canning music concerts that have been shot at some venues exclusively to be webcast this Season with leading artistes and that there is no rethink on the issue.

“Even when we decided on skipping live concerts and shooting concerts to be webcast we had also decided that even if the state relaxed the rules for shows in halls we would not opt for live concerts,” said Harishankar.

The webcast concerts are going to be accessed free by sabha members while others will have to pay to watch/listen to the concerts.

The schedule for these online concerts will be put out in a week’s time, we are told.

Bharatiya Vidya Bhavan, Mylapore has chosen to host live concerts in the open at a school ground in Kilpauk and has just released its schedule. They will be free to access and transport arrangements for Mylapore area rasikas are being planned.

There will not be any concerts at Bhavans’ halls at its East Mada Street premises.

Meanwhile, Charsur, which hosts concerts and markets CDs and digitised Carnatic music has begun marketing its own December Season concerts series ( for 15 days featuring 30 artistes in two concerts a day), featuring the top artistes. This series will run in December and can be accessed for a fee.

The Music Academy has already decided to webcast concerts and has also put out its concerts schedule. But there is no word on how non-members can access the concerts.