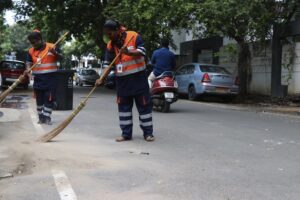 The agency took over conservancy operations in Mylapore on Nov. 10.

The official says that frequent need for garbage collection is happening now as the vegetable market at South Mada Street, streets/areas having commercial complexes, hotels and hospitals generate a large amount of waste.

He says that street corners or junctions surrounding these places have become a garbage dump yard, over the years.

At the slum colonies like Kapali Thotam and Pallakumanagar, he says a huge quantity of legacy waste is found between one block and the other. Hence, clearing them is taking more time and effort. However, we are doing our best to clean all of them, he says.

“Our aim now is to first clear these garbage dump yards and the legacy waste in all areas. Because only when these kinds of waste are cleared people will be able to witness a visible change in their neighbourhood and would get motivated to keep their streets clean.”

Simultaneously, the agency is also holding frequent awareness campaigns to educate people regarding the source segregation of waste. The official says that they are also carrying out door to door campaign, daily to spread awareness on the importance of garbage segregation.

One Comment on “Waste keeps generating even after we make multiple rounds of garbage collection, says official attached to Urbaser”