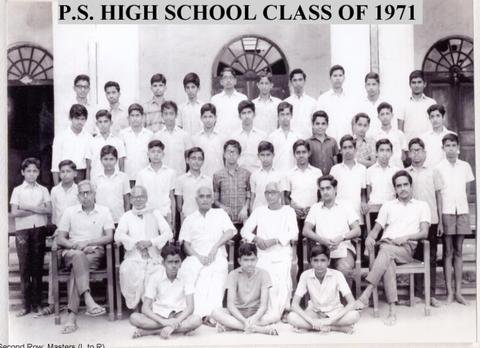 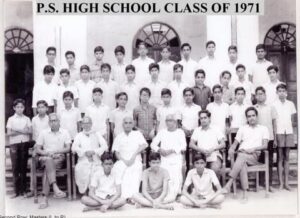 The 1971 batch of P. S. High School, Mylapore is networking now to prepare for what will be the golden jubilee of this batch.

After almost 35 years, some of the batch mates have managed to group again and sat in the very classrooms they sat decades ago and walked through the nostalgic moments together.

Th networking has taken time but thanks to Loganathan, fondly called Logu, the then class leader, who continued to be associated with the same school, where he studied, as he worked there the group has got bigger now.

There were totally ten sections of S.S.L.C. in 1971 and as many as 352 students in different mediums of education, opting for specialization in various branches like mathematics, chemistry, engineering, secretarial, etc.

The Class of 1971 met at regular intervals in the school campus since 2003 and out of these meets evolved an immediate plan to provide medical checkup to all the 1450 students on famous now and this was held successfully under the leadership of an alumnus S. Ramachandran, a popular placement services executive under the guidance of Logu, with the support of the school and Dr Jeyam, with the alumni contributing sizeable financial support.

The alumni also had a family get together to cement the bonding of decades.

After several rounds of discussions and consultation with the school management, it was understood that the school was urgently in need of additional rest rooms for students and the  1971 alumni has stepped forward and offered to construct the same, as part of their golden jubilee contribution.

The pandemic put the breaks on this project top of 2020 but later, got the bhoomi pooja done on Dec 14. Construction is well under way and is expected to be completed in January 2021.

Additional plans by way of contribution to the school’s needs are in discussion.

Here are some alumni who have made a name for themselves –

Venkat Venkatasubramanian is the Samuel Ruben-Peter G. Viele Professor of Engineering at Columbia University. He earned his Ph. D. at Cornell University, USA, and is recognized internationally as a leading authority on Artificial Intelligence (AI) in chemical engineering, with ground-breaking contributions. Gopalaswamy Ramesh holds MS in Management from Stanford University, California, MS in Computer Science from IIT/Madras (the thesis winning National Gold Medal), and BE from IISc, Bangalore. He worked with Oracle Corporation and Oracle products for close to twenty years and played a key role in launching Oracle in the ASEAN region, consulting in a dozen countries.

Mahadevan Ramesh did M. Sc in Physics from IIT Kanpur, and Ph. D from Ohio State University, USA. He worked in Carnegie Mellon University, Pittsburgh, USA followed by some stints at some of the leading companies like Storage Technology Corporation and at Maxtor Corporation, Colorado, USA where he played leadership roles in international product development teams in Singapore and the US. After nearly twenty five years in the USA, he returned back to India and was a management and engineering consultant in Chennai and an adjunct professor at the SSN School of Management, Chennai.  Dr Mahadevan Ramesh passed away in 2016.

S Ravichandran: after completing BE followed by MBA from IIM Ahmedabad., joined as the first employee in 1995 and had risen to become Deputy Managing Director for TVS Supply Chain Solution which is currently a $ 1BN company having presence in 50 countries having offices in 20 countries with 22500 employees.

T. R. Sachidanandan: A rank holder in SSLC, this chartered accountant and company secretary, after a brief stint in a PSU Bank performed contributing roles in private sector.

D.Suresh: ( part of the popular writer team Subha). He partnered with a like-minded college friend Balakrishnan to continued his passion for writing by writing stories for magazines under the pen name Subha (SU-resh &  BA-lakrishnan). has written more than 450 of his monthly novels, written scripts as co-authors for around 20 movies.

Dr Rajarathnam: Was professor of ophthalmology in Madras Medical College , has performed creditably conducting more than 12200 cataract and other surgeries . As Director of State Blindness Control Society (Tamilnadu) and Director and Superintendent, Regional Institute of Ophthalmology,Egmore, he has trained more than 400 MS and DO students.

One Comment on “Class of 1971 of P. S. School preparing for golden jubilee meet”