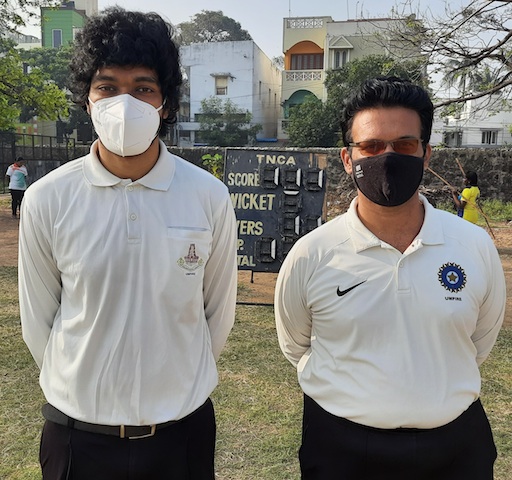 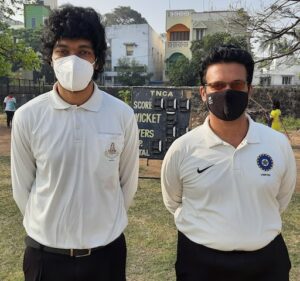 Cricket players and officials entered the St Bedes play ground in Mylapore over the weekend for the first time in nine months with mixed feelings. And, to play under rules for the ‘new normal’.

Rules framed for games played under still-pandemic conditions as part of the TNCA league matches.

For starters, all the players and officials were at the ground at least an hour before the scheduled start of play on Sunday morning for a temperature check.  The two umpires called on the captains of the two teams to brief them of the special playing conditions.

But on this ground, players seemed keen to knock the ball.

Equally excited was a 65 year old who is also passionate about the game. Former Reserve Bank leg spinner S. Madhavan, who retired from the bank a few years ago, still plays the game.  He said he was raring to have a go at the batsmen.

Said Madhavan, “I look at it this way – a full day game under the hot sun is likely to increase your immunity. Bowling and fielding will loosen up our body. So overall, it could work towards better health.”

The scene elsewhere at the double playgrounds of St Bedes located behind the All India Raio campus was equally abuzz – while there was another private cricket match at the St Bedes ‘A’ ground, footballers in large numbers were playing a practice match at the B ground. At the south end of the B ground were young silambattam trainees practicing. There were archers too, also training.

There are no bio bubbles in the TNCA cricket league like the ones in international cricket. Except the two umpires, none of the players wore a mask on Sunday. A private caterer provided breakfast for one of the teams. While there is still some amount of apprehension among a few cricketers and the officials, overall a large percentage of them seem to have unshackled themselves from the fears of the virus.

For the record, this Sunday match went almost the full distance and ended well after 4 p. m. It was indeed a full day of cricket played after a long, long break just as 2020 got to a close.