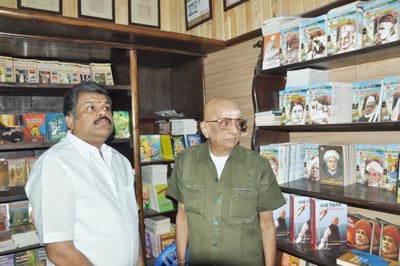 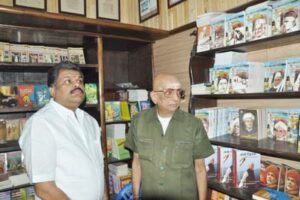 The Alliance & Co., the century-plus old publishing company based in Mylapore is working on a book on the social history of Mylapore.

It is now looking for photographs of Mylapore of the 19th and 20th century and beyond – photos of local institutions, of the facades of R K Mutt Road, then called Brodies Road and of Mada Streets and of the well-known stores and restaurants of the early 20th century.

Says V. Srinivasan, grandson of the founder of Alliance, “I appeal to Mylaporeans who may have some significant pictures shot in Mylapore to share them with us for the book. I am looking for pictures like the buildings that stood on the road between our store and Luz Circle some 50 years ago before the road was widened.”

Srinivasan says journalist Sampath Kumar has already submitted the manuscript for the book but he wants to collect more photos to include in this book that will be in Thamizh.

If you have photos that you may want to share with Alliance call Srinivasan at 24641314.

>> Read a report on the opening of Alliance’s renovated store in Mylapore – https://www.mylaporetimes.com/2012/09/new-showroom-of-alliance-company-opened/