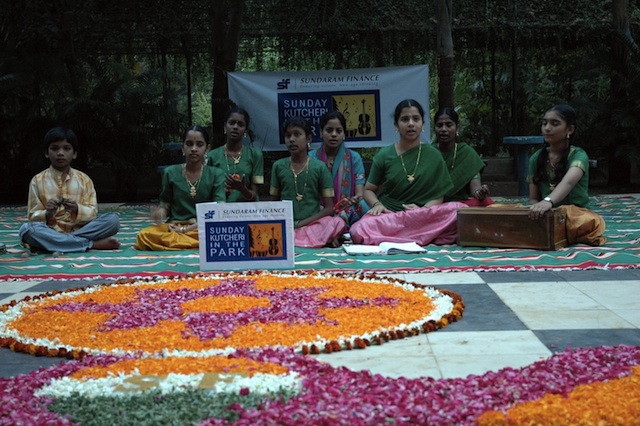 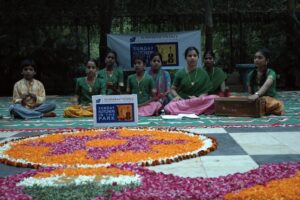 It was this day (first Sunday of February 2006) 15 years ago that T T Srinivasaraghavan, MD, Sundaram Finance Ltd., launched the open air, no-mikes no- speakers ‘Sunday Kutcheri in the Park’ at 6.30 am at the Chess Square of the Nageswara Rao Park in Luz.

Since then, the Sunday ‘mikeless’ kutcheri has been organised without a break every first Sunday of the month for an hour in the morning till March of last year when COVID restrictions led to a break that has now extended to a year.

Around 1400 music students / artistes aged below 15years have presented the mikeless kutcheri.

How it all started

Interestingly, it was the spirit of the annual Sundaram Finance Mylapore Festival that led to the spin-off of the Kutcheri in the Park.

Kutcheris in the park had been organised previously, once a year, as part of the annual festival held at many venues in and around Sri Kapali Temple, Mylapore.

The park users suggested that Sundaram Finance should look at hosting concerts more frequently and not restrict it to just once a year.

The first Kutcheri in the Park has an interesting background to it. Srinivasaraghavan recalls the students from that kutcheri way back on the first Sunday of February 2006. ( photo above)

“It was by a group of students from Vishwa Vidyalaya, Vandalur, a school run by two ladies. Many of these students were children of farmers and labourers, none of whom had ever had the benefit of a school education. Their performance that morning would rank to this day as one of the best. We heard that they have gone on to achieve bigger laurels, both academically and in music.”

He says the park event has been a nice platform for youths to showcase their talent. “We wanted to bring in an informal atmosphere and encourage the children to display their natural ability without really being under the pressure of ‘formal’ performance, ” he adds.

At the end of the kutcheri, the students of the very first concert narrated as to how they started in a van at 5 a.m. that morning from Vandalur to reach the Nageswara Rao Park by 6 a.m., a good half hour before the scheduled time of the kutcheri. 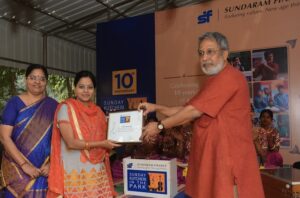 Under the watchful eyes of headmistress Mala and vice principal Vasumathi, another set of students from the same school came to present on the occasion to celebrate the completion of the 10th year (second photo here is of T T Srinivasaraghavan presenting mementos to them).

Sticking to the Mikeless Concept

Even for the music teachers, each of the kutcheris in that early phase was a first time experience and they had to prepare their students accordingly.

Initially, there was pressure from the audience to get the host to use mikes and speakers for the concert but Srinivasaraghavan was firm that this would remain a ‘mikeless’ Kutcheri.

He recalls,“We did not want to disturb the peace of the morning walkers with loud music. We have to be conscious and mindful of the fact that we operate in a public place. It would be presumptuous on our part to assume that all of them are lovers of Carnatic music.”

Being an open-air kutcheri, amidst the rustle of leaves and chirping birds, the belief was that it would be able to bring out the best in the children if they performed without the help of mikes and speakers. The mike-less aspect later got much appreciation.

In 2016, Limca Book of Records featured The monthly Sunday Kutcheri in the Park as a National Record for the longest running non-commercial open air musical programme for children.

Hopefully, as pandemic conditions get down to near normal, this unique cultural event will resume again in the park.