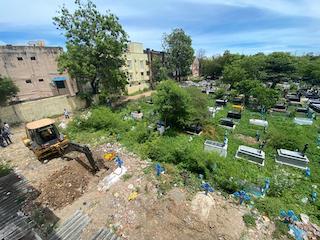 On Friday, since 9 a.m.  Father Marshall, a junior Catholic priest now assigned to a church in R. A. Puram oversaw the burial of 16 bodies at a public cemetery located off St. Mary’s Road in Mandaveli.

When the JCB, which is now a permanent fixture inside this burial ground since April 2020,  was rested, the priest and workers realised that if they had to bury any more bodies here, they would have to scrape the thin slice of ground adjoining the boundary wall beyond which lies alongside a Slum Clearance Board block.

“We don’t know what to do now,” said Fr. Bosco, parish priest of Our Lady of Guidance Church on Lazarus Church Road, which manages the cemetery which belongs to Chennai Corporation, the civic body of this city. ” We may have to tell people that they will need to find place elsewhere.”

That ‘elsewhere’ means trying hard at a graveyard on the fringes of North  Chennai.

For some years now, the Mandaveli cemetery has been the go-to place for Christians of the city to bury their dead. This has been the only space with land open for burials.

Last year though, the flow of bodies compounded by Covid deaths increased. Fr Bosco says his records show that some 145 bodies were buried here since April 2020.

“We have not had the heart to deny burials this far. How can we do this?”, says Fr Bosco who depends on his young assistant to process the funeral formalities. “Since churches are now closed we tell mourners not to bring the hearse to the church. We bless the body at the graveyard.”

Adds Jerry, a volunteer at the R. A. Puram church, “We somehow managed the situation at the graveyard last year but now, we cannot.”

Fr. Bosco says the small team of Christians which oversees matters of the cemetery is meeting this weekend to decide on the course of action. It intend to ask the city civic body to grant new space for Christian burials but that space may be found only on the fringes of the city.

Very few Christians here opt for cremation of the dead.