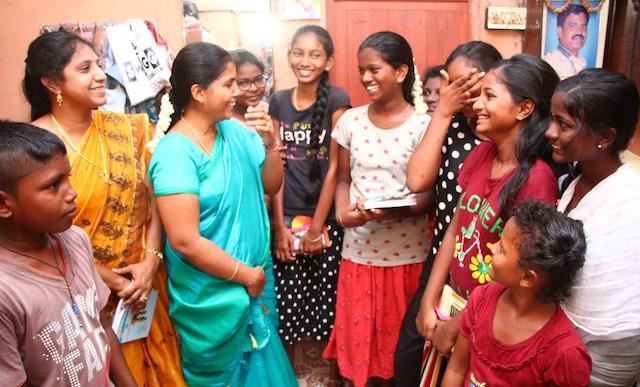 Geetha Lakshmi has been running an educational academy on Madha Church Road in R. A. Puram primarily aimed at offering tuitions to school and college students.

Today, she ventured into an activity she had been nursing for sometime – social work.

Human Foundation Educational and Charitable Trust, which has Geetha and her friend Revathi as the two trustees, on Tuesday ( July 6) distributed notebooks and stationery to 30 children who live in the slum area of Meenambalpuram in the shadow of Citicentre shopping mall, Mylapore.

“I have been educating some poor school students for free at my academy, ” said Geetha. “The idea of a Trust was formed last year.”

Since funds are slow to come by in these trying times, Geetha says they will space out their charity work. Next on their plan is to support children in the coastal Nochi Nagar in San Thome.

Geetha, a resident of Mandaveliapkkam has informally run the tuitions centre for over 20 years but Right Choice Academy was formalised much later.  Plans to offer training to youths attempting exams that admit people to state government services have had to be put on hold due to the pandemic.

“The pandemic has hit us all badly,” says Geetha. “So though my teachers offer tuitions online I have asked them to keep the fees students pay so that their earnings keep continuing.”