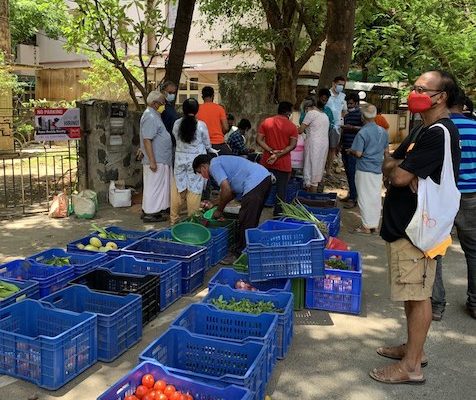 The R. A. Puram Residents’ Association (RAPRA) has been collaborating with the state government’s Horticulture Department to arrange for the sale of vegetables and fruits in this neighbourhood. And residents are happy with this move since pandemic-time rules restrict their shopping and they also get good quality foodstuff.

On three recent occasions, during the lockdown period, a team of the Horticulture Department heeded to the request of RAPRA and transported farm-fresh vegetables to be sold locally, says Dr. R. Chandrasekaran, patron of RAPRA.

Once, it was a ‘combo bag’ containing an assortment of vegetables and this was priced at Rs.100 per bag.

A week later, people got to buy fresh vegetables which were sold a la carte as per buyers’ choice in a quiet, open space in the R. A. Puram colony.

The next week, a sale of organic vegetables mix, priced at Rs. 200 per bag was organised.  Some 60 bags were sold.

Dr. Chandrasekaran says that the association has built a close rapport with the Horticulture Department over recent years.  For gardening enthusiasts in the locality, RAPRA has organised many gardening workshops.

Besides talks by officers, seeds, saplings, tools and manure has been sold at such meets.  A few months ago, the staff demonstrated to home gardeners a ‘do it yourself’ (DIY) drip irrigation kit – this is now sold at subsidised rates. The kit allows for watering of potted plants in a systematic manner. This kit can bee used at ground level as well on terraces.

In the past weeks, naturally-ripened Baganapalle mangoes were sold locally – the department’s van halted at three vantage locations and sold these mangoes in no time.

Dr. Chandrasekaran says that residents are so happy with this arrangement that they want a regular ‘sandhai’ ( market ) to be arranged inside the neighbourhood. Modalities are being worked out.

If your campus / colony wants to also enjoy a similar arrangement, talk to the Horticulture Department.  Get details from Dr. Chandrasekaran – 9841030040.