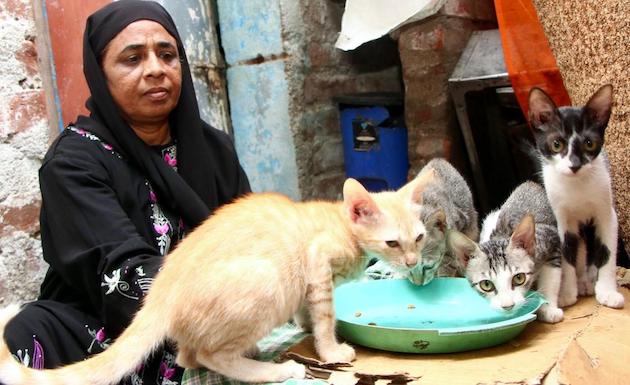 If you reside in the areas located off Bazaar Road in east Mylapore zone, you may be familiar with scores of cats and kittens who make the unseen nooks their home and seek food and water in that bazaar. They also multiply and move into other streets.

When Amir Begum began to notice that there were dozens of them around the area where a small mosque is located on Papanasam Sivan Street, she began feeding a few.

She soon realised that she had a job on her hands. For, the feline family was rather large.

“People were also dropping off kittens at my doorstep,” she says.

Now, Amir Begum hardly has the kind of money to keep feeding stray cats and kittens year round but with support from others, she carries on her service here, quietly.

On hearing her story, a city-based voluntary body called Cattitude began sending a monthly supply of pet food for the cats but this is just not enough to feed the 20-plus animals.

Amir also gives away kittens in adoption. Free. Just now, she says she has four lovely kittens for new homes.

(( )) SHARE THE STORY IN YOUR AREA : of people who do community work, people sharing their talents. Drop a line to –
mytimesedit@gmail.com. Your input can. help us do a good feature.