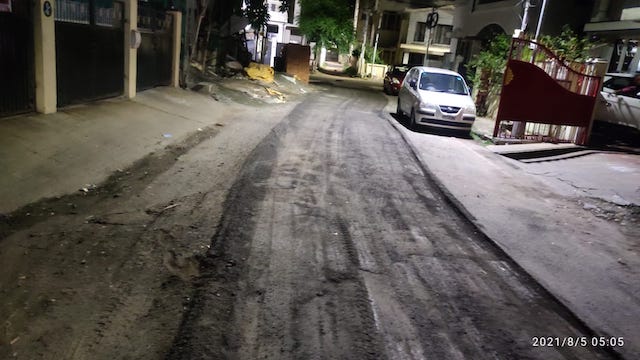 Is your street or road being re-laid? Or are preparations on by civic workers to relay your street?

Then, are you aware that before the relaying process begins the street / road has to be milled?

The top layer of existing materials has to be scraped off by the milling machine before the new work is executed. This is the proper way to relay streets. It also ensures the height of the street is not higher than the level of your gates – if this happens floodwaters will run into your campus.

Just now, streets in Mandavelipakkam are being relaid.  Because of civic activists here like C R Balaji who also resides in this area, the milling work is executed as per the regulations in the book and when it is shoddy, Balaji says he calls the area engineer of GCC and gets it redone.

He says engineers do respond positively when they get proper and timely feedback.

Balaji says the rules require for milling ( scraping) of 40mm and this can be crudely measured with a ruler at the edge of the milled portion of a street. “Do this as the road or street is being scraped and if it is not satisfactory call the local area GCC AE,” advises Balaji.

One major problem posed by people when relaying is planned  is of parking of cars / taxis on the road – this  does not allow workers to relay that section of a street as it should be done.  GCC staff say residents are told beforehand of the work and in case cars still remain, the vehicles are now towed away.

Many people say taxi operators from outside the colony park their taxis in the free street spaces. Some from Mylapore park taxis in Mandaveli and R A Puram too. They say police must take severe action against these violators.

One Comment on “If your street is to be re-laid now are you ensuring it is done right? Here is the Mandavelipakkam case.”