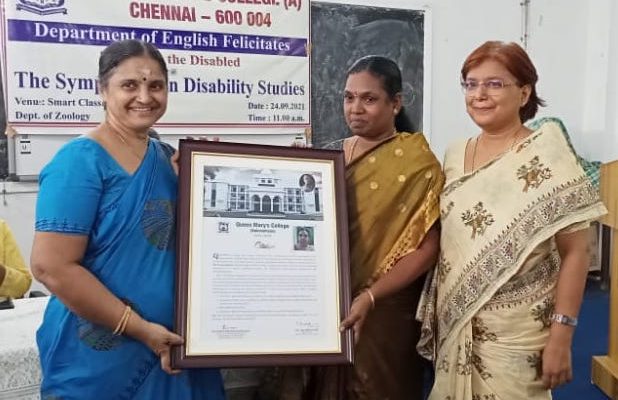 The Department of English of  Queen Mary’s College organised a symposium on Disability Studies on September 24.

At the inauguration, the college awarded citations to four individuals of the QMC fraternity, who have made a significant contribution with regard to service to the disabled. The citations were presented by the college Principal, Dr. Uma Maheswari.

Among the four honourees is K.M. Kanthi, retired Associale Professor of English, at Queen Mary’s College. Kanthi, an alumna of QMC was appointed by the government in recognition of her being one of the few visually challenged people to complete M.Phil. She served QMC for 33 years. She spearheaded the representation of the visually challenged students on campus and worked overtime to have their needs met.  After retirement, she serves as a trustee of Help the Biind Foundation. ( photo below) 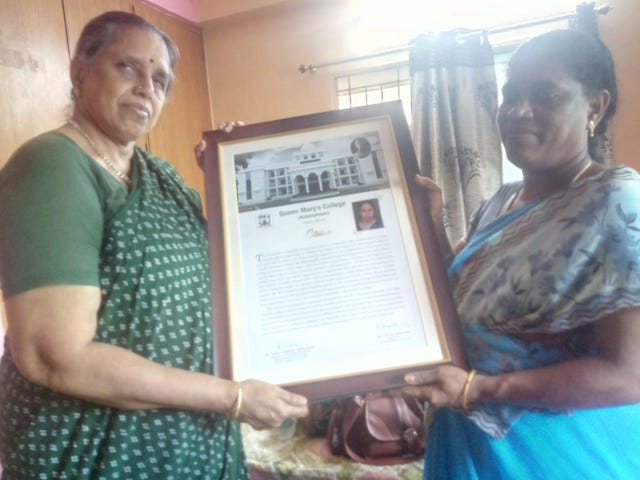 Another awardee, Dr. Sivaraman, Associate Professor of English, Presidency College, is a high achiever, whose expertise is sought by the Department of English. Like Kanthi, he has converted his own challenges as a visually challenged person, to triumphs and has specialised in Education and Assistive Technology for persons with visual impairment. He has been instrumental in converting 30,000 books into accessible ‘E’ as well as audio formats at the Presidency College library.

The third awardee, Smitha Sadasivam’s battle with multiple sclerosis began when she was a third year undergraduate student at QMC. She acknowledges the support of her teachers at QMC, especially that of Kanthi in finding the courage to complete her undergraduate and postgraduate studies and securing an M.Phil in Psychology. Today, she is a cross-disability rights advocate. 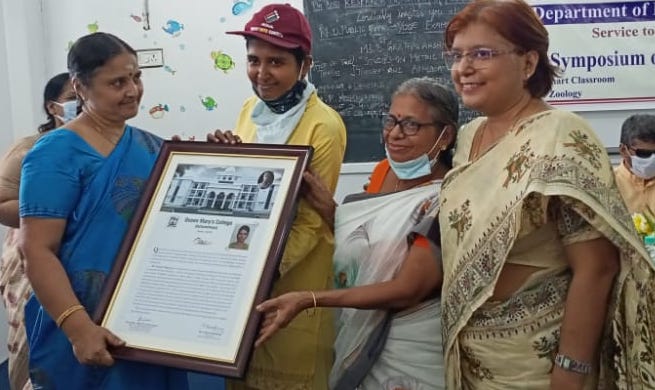 The librarian of the college, Dr. Jeyashree was also honoured for her service to the cause of the visually challenged as she has taken efforts to get trained in making the library more accessible to the visually impaired. ( top most photo)

The occasion served to reinforce the commitment of the college and the faculty to make education inclusive and always be sensitive to the needs of the differently abled and provide the support required for them to pursue their goals in securing education.