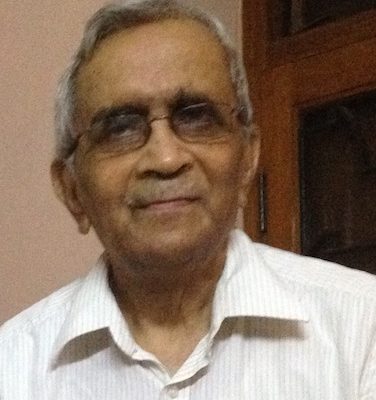 Vasanth Bhandarkar, a resident of Luz Avenue since 1953, passed away at his residence on September 12. He was 83.

Subsequently, he worked at Ennore Foundries before starting a die-making unit in Alandur in 1971. Soon afterwards, he founded an aluminium gravity die-casting foundry in the Guindy Industrial Estate. Over the next two decades, the foundry built and maintained a reputation as a supplier of quality castings for critical components and gained and retained a slew of marquee customers such as MICO, Eicher Motors, Kawasaki Bajaj, etc.

Peers, customers and competitors alike acknowledged Bhandarkar as an authority in the field of gravity die-casting and admired his die-hard commitment to quality in the manufacturing process. He was one of the first foundry owners to import a spectrometer for in-process analysis and control of aluminium alloy composition in gravity die-casting. In 1995, he sold the business and became a consultant to several of his erstwhile customers.

A man with boundless energy, an infectious zest for life, and an insatiable thirst for learning, he was a big fan of Hindustani classical music and its allied genres. He was a past treasurer of the Old Boys’ Association of his engineering college and the Luz Avenue Residents’ Welfare Association.

Later in life, he bore the health issues he had to face, caused by the removal of a cyst in his brain, with great fortitude, his son said.