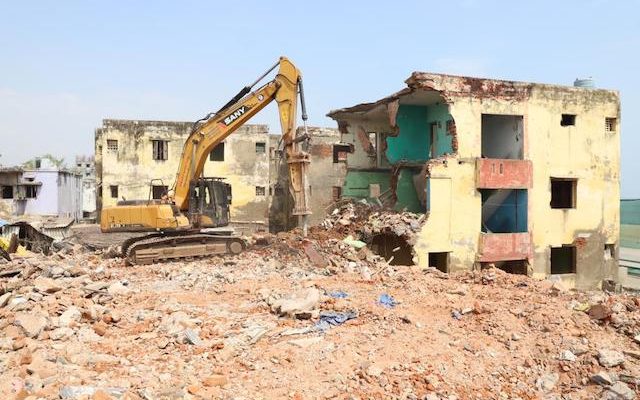 The last of the old blocks in Dooming-kuppam are being demolished off Marina Loop Road.

These were two-storeyed blocks which were the first to be built. by TN Slum Clearance Board for the fisherfolks here. Over time, the houses have changed hands many times over and open spaces between blocks and around, converted into huts and light structures for other families to reside.

The demolition is part of the Board’s continuing plans to raise high-rise blocks having slightly bigger and better flats to be given to the residents here.

One big sticky issue in this redevelopment in Mylapore zone is that while the Board agrees to also accommodate ‘encroachers’ in these campuses in the new blocks, the new blocks must have many floors to accommodate all; and this is opposed by residents who fear power failures and delayed maintenance of lifts will badly affect people residing in the higher floors.

Last year, over 200 families were given the keys to move into the new flats and a section of people from Dooming-kuppam also got a new flat.