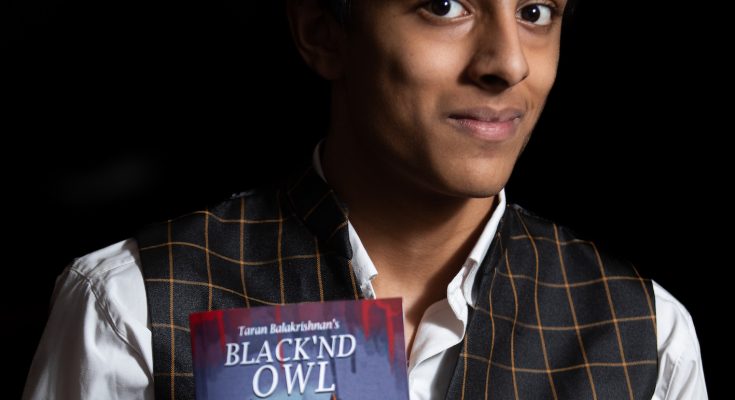 14-year-old Taran Balakrishnan let his imagination fly when the pandemic tied down this school student to Zoom classes and homework and that got a tad boring. He played around with images of murder and gore and chases and then put them all in a book.

An avid reader and fan of Agatha Christie, he decided to write his murder mystery novel, set in 1950s England.

His book “Black’nd Owl” was recently published by the well known children’s theatre and writing company CreaPlay. The book was released worldwide on Feb.7 on Amazon.

The novel takes off with 10 rich and famous people attending a party at an English manor. Suddenly all of them are found to be dead, under mysterious circumstances. The story then travels in a non-linear fashion, traversing different time periods and different locales in Europe, weaving tales of each of the characters.

Taran is a 9th standard student of Chettinad Harishree Vidyalayam in R A Puram.  He is a musician who plays the flute,  the piano and the guitar.

He is also a budding stage actor. He says he intends to become a film director and actor when he grows up. He is currently working on an anthology of poems and also a historical fantasy novel.

Taran Balakrishnan’s Black’nd Owl can be purchased on the Kindle bookstore on Amazon.in. Print copies may be purchased directly as well from Ramya Mani 7550008741 or Ramyamani@gmail.com