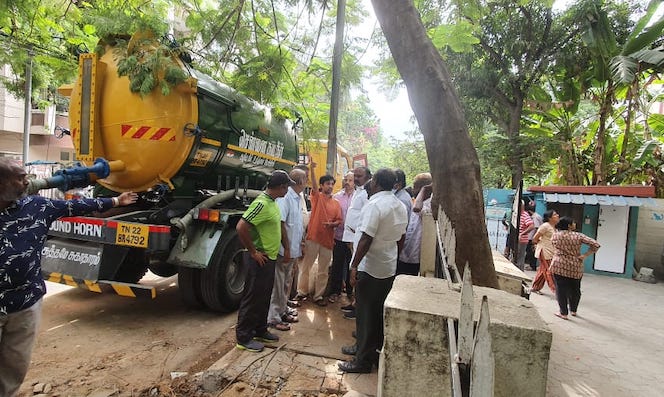 Residents of Dr. Ranga Road are fuming. They have had a string of civic headaches. And have fumed often. But the latest civic mess has made them very angry, going by the comments shared by a few who reside off this busy road.

When work on new drains began in this area, the contractor and his men undertook what can be called crude methods. When excavation was done, roots of avenue trees were damaged; two trees collapsed.

Once the excavation was over, sewage water began to accumulate in the drains and pollute the place.

Power cables and other cables were flung all over; power got snapped in some campuses and recently, a power line caught fire and went off like Deepavali crackers. The cable was relaid recently after much persuasion.

Prasanna Venkatesan from Aditya Apartments says that despite the residents pointing out location of pipes and specifically requesting the workers team to manually dig in the portion of pipes and wires, they used the JCB. Hence, Metrowater, sewage and electricity lines were mishandled.

He adds, “Till now, the sewage pipes of Aditya Apartments ( 30+ flats) and two neighbouring houses were broken at three different times. Metrowater and GCC tells us that SWD team have the resources to fix it. But, even with requests, they never fixed it.”

Ashok C. R. from Jains Asvarya apartments says that when major projects are carried out, schedule of work needs to be shared with residents and work supervised.

Resident Suganth says TANGEDCO and Metrowater officers must be present on project work-spots when a major job is carried out to ensure chaos doesn’t happen. “Right now each department is passing the buck,” he adds.

Arunkumar from Sri Ranga Apartments says the sewage line is directly flowing into storm water drain in this road for almost a year.

Another resident from Sri Ranga Apartments says, “Since 2015, we have faced issues of sewage overflows within our compound due the perpetual blockages at the main chamber across the road. With the new storm water drains being installed on the northern side, the storm water drains on the southern side of Ranga Road is now filled with sewage due to breaking of the sewage pipes at various locations.”

Mylapore MLA Dha Velu visited this site and was briefed of the civic mess.