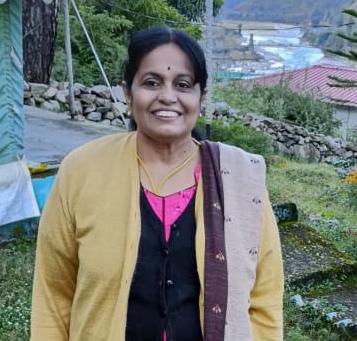 Recall the recent tragedy in Kedarnath?
The helicopter crash in which some pilgrims died; they were visiting the pilgrim town of Kedarnath who and were on a returning by flight.
Some of them were from this city.
And among them was a Mylapore couple.
One of them lives today because of a twist that overtakes life; his partner died in the crash.
The person whose life ended in the cold mountain ranges of the pilgrim zone was Kala Ramesh, aged 60 years.
She was a  resident of Madhuram Apartments,  Balakrishna Street,  Mylapore.
Along with her husband, R. Ramesh, (who retired as senior executive in  the IT industry ) , had planned a trip for Chardham through a tour operator. The duo joined a relative from Mylapore, a friend from Mylapore and two other relatives from Anna Nagar.
After completing the darshan at Haridwar, Yamonatri, Gangotri, Uttarkashi and GuptKashi,  the group was to head to Kedarnath. This was on October 18.
Kala Ramesh, Ramesh and their two  relatives of Anna Nagar chose to take the  helicopter service, to Kedarnath.  The group had darshan at Kedarnath, group got into the copter for the return trip.
Recalls her husband, “Kala was very excited and most of the time, she went into meditative state.”
On the return flight, Kala and her two relatives got  seats in the immediate chopper and Kala’s husband Ramesh was booked in the subsequent chopper.
Ramesh waited in the boarding lounge when the first chopper took off and within four minutes, news came in that this chopper had crashed. Ramesh was devastated.
After completing the formalities at Rudraprayag, the remains of the dead were brought to Chennai.
Kala’s family is hugely grateful to the governments of Uttarakand and Tamil Nadu for immediate and end-to-end assistance provided during their darkest hour.
Says Ramesh, “Tamil Nadu government officials were in touch with us, soon after the copter crash news went public. Chief minister M. K. Stalin sent a minister to the airport to condole and arrange for whatever we needed.”
Kala is survived by husband R. Ramesh, son Archith Shriram, daughter Sanjana, daughter in law Nithya and son in law Chandramouli and host of relatives and friends.
Kala was a housewife; she gave her time to the parents of ‘special children’, her family said, adding that she took to learning and reciting religious texts and slokams during the pandemic years.
The family can be contacted at 9841691799, 9841699156, 9884260887, 9841503729