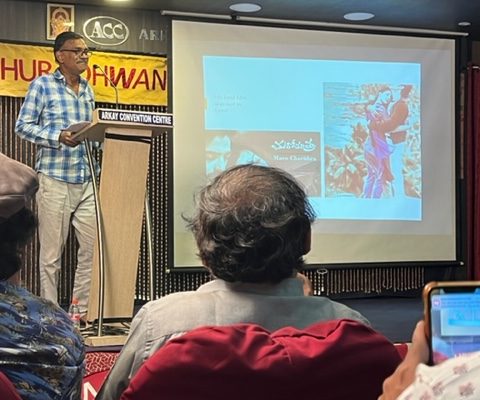 There are loads and loads of stories on two famous Balachanders of this city – S. Balachander – film maker, veena vidwan, chess prodigy and more. And film maker K. Balachander; both longtime Mylapore residents.

On Tuesday evening, at Arkay Centre in Luz, historian and columnist Venkatesh Ramakrishnan, in his signature breakneck speed, soaked the 70-odd people in the hall with the load, in two packages.

Tracing the roots, teen years and growth of the Balachanders, Venkatesh laced his presentation, which is part of a series that Arkay hosts here, with lots of less-seen visuals.

And we got to know that when ‘veena’ Balachander travelled to perform, in his teen years, he would take part in chess tourneys held locally, or tourneys his hosts got others to set up – because he loved playing chess and was a champ too. Also, in his later years, Balachander would always carry his camera and he collated what his son later said was the best photo collection of temple gopurams of south India.

The ‘other’ Balachander, the film maker was deeply ingrained in the English language, perhaps well taught in school. So much so that all his early plays were in English ( he moved to Thamizh after he realised he could draw a big audience here), his scripts for the early movies also were laced with English dialogues.

And he had to have his office and workplaces spic and span, not tolerating a shade of dust on his work table, sometimes blowing a fuse if he noticed things were not in the order he liked.