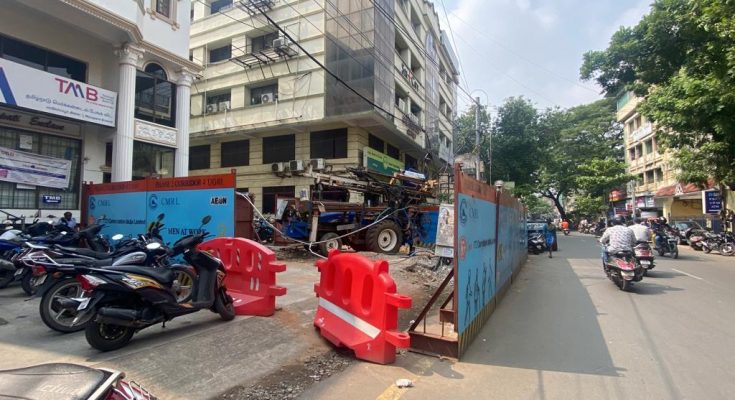 Shop keepers in the eastern end of Kutchery Road say that some 30 to 40 retail shops, small and medium will be badly hit when work on the Chennai Metro rail line begins on a full scale.

Some have made plans to shift.

One such is the famed Dubba Chetty shop for Indian medicines, which has bene here for over 135 years. Badrinath here says he has located space on the mada street near Sri Kapali Temple and will shift when the time to move out arrives.

But shop owner Meeran, his neighbour, who deals with used drums and packaging, says it would have been better for CMRL, the company managing the rail project to provide alternate space to those whose businesses are badly affected.

At Natesan Chettiar’s shop, which deals with paints, tools and hardware, and has been around for 60 years, the staff here says that they will have to face the inevitable when the rail line work begins. “If this key road is blocked, customers will just not come by.”

This is the sentiment echoed by the owners of Crown Bakery on Bazaar Road, another longtime business of this zone and a favourite for many for its buns, cakes and breads. “Our bakery will stand but who knows what will happen once work starts and roads are dug up or barricaded.”

Abdullah, who runs a shop near the mosque says that while the rail line is welcome, CMRL must issue to people like him, a detailed schedule of work plans so he can make his own plans to shift. ” I don’t have the kind of money to rent a new place just like that,” he says.

(( )) WATCH VIDEO of Kutchery Road Shopkeepers talk about the effect of the Metro project – https://www.youtube.com/watch?v=cp7yiH8QcII

<< If you reside in this zone, tell us how the rail project work will affect your life