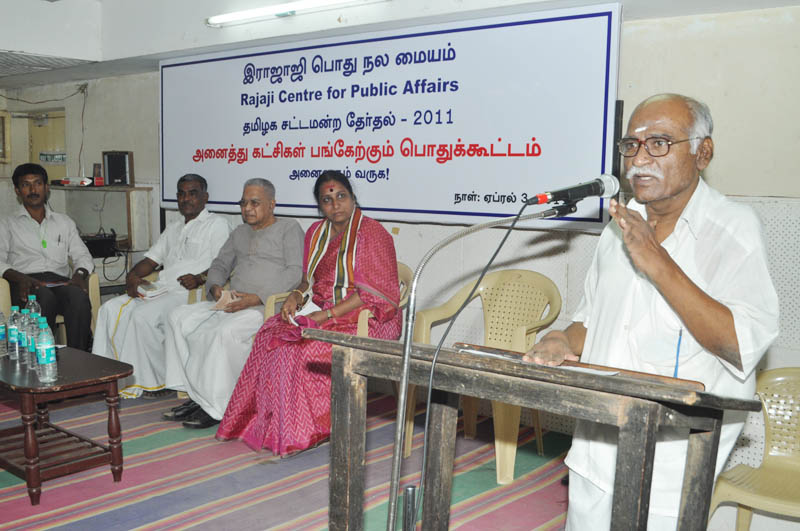 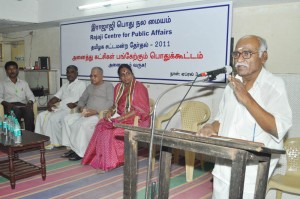 Candidates contesting the State elections in Mylapore constituency did not have much to say on what they would do for Mylapore at a face-to-face meeting between them and Mylaporeans held on Sunday, April 3.

Organised by Rajaji Centre for Public Affairs at Gokhale Sastri Hall, Karpagambal Nagar, Luz, the meet was arranged to provide an interface between candidates and voters.

The welcome address was delivered by B. S. Raghavan, trustee, Rajaji Centre for Public Affairs.

Ashoke Rajendran of Makkal Sakthi spoke about his party and his symbol, the whistle. He urged all other parties to stop giving freebies to people. He promised the gathering that if he was elected he would make sure that the government’s plans and policies would reach the people. He also promised that he would remain a whistle blower in society even if he was not elected.

Jayanthi Thangkabalu said that the Congress (I) candidate was the ideal person to become the MLA as he has political experience. She also said that the party will focus on implementing 100% education to all. The party would also open its office in Mylapore and residents could drop in to discuss their issues.

Mohanraj said he has been the resident of Mylapore for the last 60 years and that he had done considerable work for Indian fishermen who faced problems on the high seas against Sri Lankan forces.He also stated that if he gets elected as the MLA he would change the local RTO office to a more spacious place and promote terrace gardening in all residences.

Vanathi Srinivasan, BJP candidate who made a late entry spoke about the various developments that her party has been doing in the country.She stated that her party’s goal was to promote national rivers connection.

There was no sign of the AIADMK candidate, Rajalakshmi at the meeting.

People who attended the meet said that there was no time for them to raise questions and interact closely.

<< Extensive coverage of the election scene at www.mylaporevotes.wordpress.com >>