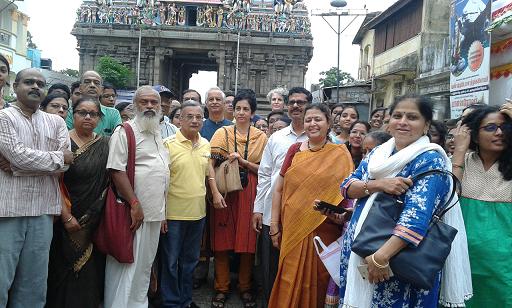 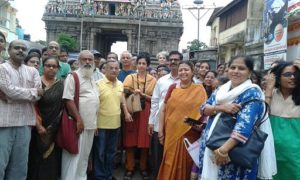 It was cloudy on Sunday, Aug 13, morning, rains were expected soon. The people who had gathered outside Sri Kapali Temple, Mylapore to listen to historian-scholar Dr. Chitra Madhavan’s temple talk didn’t seem to mind the cool breeze or the grey clouds.
A few of them came prepared, with umbrellas in their sling ons.
I did not expect such a huge crowd on a Sunday morning, I was overwhelmed says Chitra, referring to the more than 150 people who had gathered there.
The crowd included a chartered accountant interested in photography, a few housewives, a foreigner, a couple of architecture students and a few teenagers.
About an hour was spent at Sannidhi Street, where the history of the temple and the architecture on the eastern gopuram was highlighted. A walk around the temple to the smaller gopuram near the temple tank revealed interesting facts.
The temples near Chitrakulam tank were next on the agenda. A slight drizzle had started then. The umbrellas went up and the walk continued.
At Chitrakulam, the theological difference between the two temples, Sri Vedanta Desikar Temple and Sri Adi Kesava Temple were explained. Just outside these temples, the architecture was showcased.
A little before 8 a.m., the drizzle became heavier. The talk had to be cut short. The crowd disbursed with requests to keep them informed of future walks.
The walk was organised by the Chennai chapter of INTACH (The Indian national trust for art and cultural heritage). They can be contacted at 24991696, 24994909.
Interesting Facts
1. The reference to the peacock is seen in three places in the Mylapore area, Sri Kapali Temple, Mayuravalli Thayar at Sri Adi Kesava Perumal Temple and the two peacocks at San Thome Basilica.
2. A significant part of Mylapore was a Punnai forest. The tree has medicinal properties, is used in Ayurveda and also resists the salt air that blows from the sea.
3. The bottom half of the doorway in most temples is built with granite and the gopuram is built with bricks and clay.
4. Temples usually have an odd number of levels and stupas. Each window in the centre denotes a level.
5. A very rare Lord Ganesha, seated on a lion, called Heramba Ganapathy has been depicted on the gopuram of Sri Kapali Temple.
6. At Sri Kapali Temple, all levels have images of Ganesha on the right of the window and images of Lord
Subramaniya on the left.
7. The land for Sri Kapali Temple tank was donated by the Nawab of Arcot.
8. The temple tanks were water harvesting units. They had inlets and also had outlets which would take the water to  tanks at a lower level.
Reported by Preeti Srivatsan