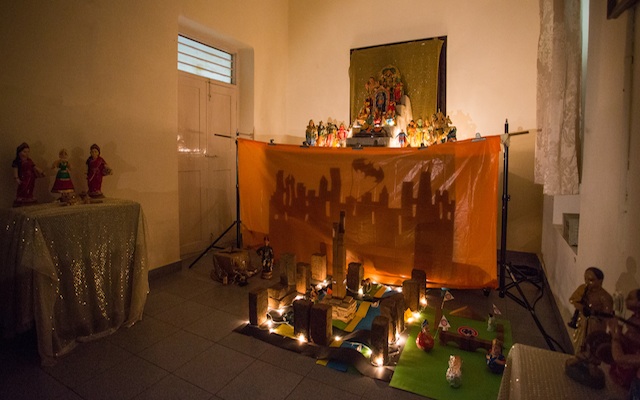 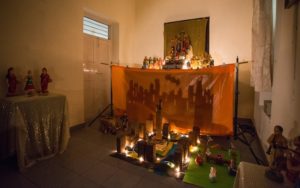 They call it Chicagolu!
Because the American city is the theme of their kolu in Mylapore this year.
Shreya and Sreenag have been residents of Mylapore all their lives. They say they have been trying to out do themselves at their golu each year since they got married a few years ago. A driving force of the golu, has been Sreenag’s mother, Archana Ram Kumar. Shreya is an arts development consultant, Sreenag is a photographer and Archana, an artist.
The first year had a political satire theme and the second was an interactive Golu, filled with games and riddles. They had to take a break from golu for two years, since Shreya was awarded the Fulbright scholarship to pursue a masters in arts management in Chicago.
On her return, they decided to theme their golu around Chicago, calling it “Chicagolu”. Chicagolu begins with the smell of agarbati and the nadaswaram music played by three exquisite temple musicans with a plate of fruits. After walking by a small display of Shiva, Gajalakshmi, Rama and family, you arrive at the main part of the golu.
This display is divided into three parts, earth, sky and heaven. The earth is a layout of downtown Chicago, flanked by its North and South sides. The sky is represented by a projected shadow of the Chicago skyline (complete with the Bat-signal, as Batman’s home city of Gotham is based on Chicago).
The Dasavataram and other Gods are laid out over five steps, making up the Heavens. The dolls are all 45-years old or older, retaining their original colours.
The symbolic representation of Downtown Chicago has a variety of landmarks, such as the Art Institute (with the two lions on either side), the Willis Tower, the Chicago River and its the three bridges, street musicians and the Cloud Gate sculpture (with South Indian tourists).
Chicago’s North Side has the Wrigley Field baseball stadium (home of the Chicago Cubs team), the South Side is depicted with very few landmarks to show the sad state of affairs.
Guests who visit Chicagolu will get to taste a South Indian version of Chicago’s deep-dish pizza along with juice and sundal, says Shreya.
Finally, guests are given a tamboolam bag bearing the Chicagolu logo, filled with traditional return gifts, as well as a bookmark with the photograph of Chicago’s skyline, a small notebook with pictures of buildings from Chicago on the covers along and a decorative paper pin.
Shreya, Sreenag and Archana live on Judge Jambulingam Street, Mylapore.
Photo Credit: BRS Sreenag.