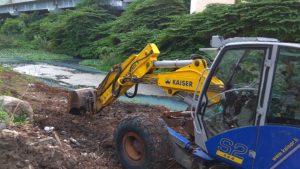 Since the past few days, the Chennai Corporation’s contract workers are desilting a section of the Buckingham canal near the MRTS station in Mandaveli.

This past week they were seen removing silt and muck from the canal’ s bed using a JCB excavator. The collected muck is kept alongside the canal. Workers say it will be carted away later in a lorry.

The work is carried out to avoid canal overflows during the monsoon.