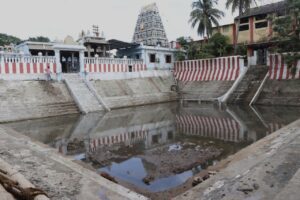 People actively involved in civic and environmental issues in the city say that paving the beds of temple tanks with clay is not the best approach in trying to retain water in tanks.

The comments come after such an effort was made recently at the Sri Madhava Perumal Temple in Mylapore.

Says T. K. Ramkumar, advocate and civic activist, “A temple tank filling up merely because the tank bottom is lined with clay or concrete is not good news. Tanks would naturally fill up when the ground water table increases. If the tank doesn’t hold water in spite of a good rain without a clay-lined tank bottom, it means that the water table has not gone up sufficiently. We should focus on improving the ground water table and not gloat over artificial impounding of water.”

Another activist and expert in rainwater harvesting,  Shekar Raghavan says that paving tank beds with clay is not a great idea. Rather efforts must be made to tap the rainwater falling on all built-up areas around a temple tank and lead it into the tank.

Says Shekar,”Take the Chitrakulam zone. Since the houses are built on small, old plots there is no space to sink wells but state agencies can set up a system which taps water falling on all terraces and private open spaces that leafs the water into the tank.”