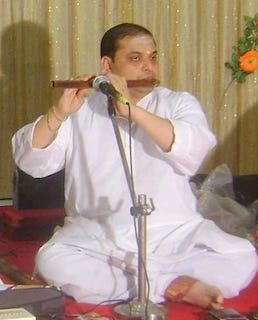 Flautist Thiruvarur S. Swaminathan, a longtime resident of Mylapore, passed away on May 8 at his home in Singari Street, behind Ramakrishna Mutt, due to acute heart failure, at the age of 46.

Swami, as he was affectionately known to all his friends and family, was born in Pondicherry and showed musical genius even at a very young age.

His father Thiruvarur Sethuraman was a Carnatic music vocalist with AIR. The family moved to Chennai when Swami was about 4 years old. Upon the insistence of their family friend flautist, late N Ramani, Swami was introduced to the flute.

Swami soon became one of Ramani’s prime disciples. His first kutcheri was at the age of 7 and his first album was out at the age of 11.

An alumnus of P. S. Senior Secondary School, Mylapore, Swami is remembered fondly by his batch of 1993 and several students as Flute Swami. No school orchestra or function was complete without Swami’s recital.

Many a trophy and award was won for the school in his early years, in cultural contests across the city. Friends recall Swami as a quiet and simple boy with great balance. He was very poignant about the loss of his father and mentor at the young age of 13. Bench-mates from school also recall his humor and mischief during history and Thamizh classes.

Swami became an acknowledged flautist and was a rasika’s delight. Not only did he play solo kutcheris, he also accompanied  stalwarts in Jugalbandhis.

He was the recipient of the prestigious Tamil Nadu state Kalaimamani award in 2010. He was an A grade artiste of All India Radio at 23 years.

Swami had travelled the world for kutcheris and had students from all over the globe. Beyond his successes and musical prowess, Swami remained genial and grounded always. He played a kutcheri at the wedding of his P.  S. Senior school teacher Lakshmi Vishwanathan’s daughter, as a tribute to his guru.

Swami remained single but was married to his music. His only other interest was cricket and would discuss IPL statistics with his nephews daylong.

His 3 sisters are still in deep shock over his sudden and untimely demise. The alumni plans to conduct a memorial service at the school premises once the prevailing pandemic situation improves.