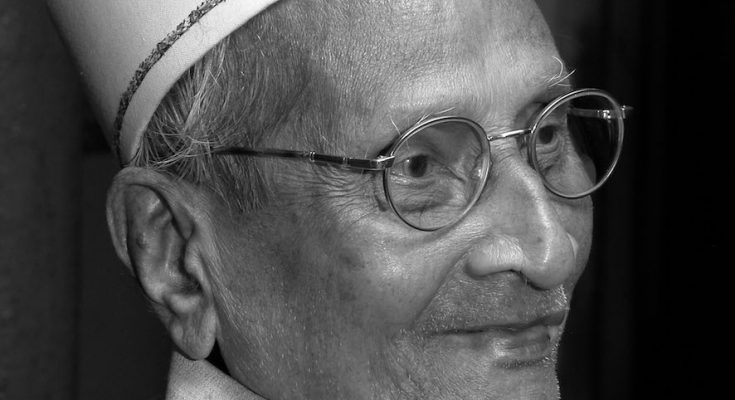 26 July 2021 marks the birth centenary of S. Manicklal Chordia, an eminent social worker who hailed from one of the oldest Rajasthani Jain families of Mylapore.

A lifelong resident of Mylapore, he grew up in Bazaar Road, and studied in San Thome High School and later attended Presidency College.

He loved everything about Mylapore – from breakfast at Rayar’s Mess to walking along Marina Beach and paying his respects at Sri Kapaleeswarar Temple.

Born to N. Simbumal Sowcar and Ratna Bai, his forefathers migrated from Rajasthan to Chennai nearly 150 years ago. Manicklalji led a life of simplicity and equanimity.

He was a Gandhian at heart and dressed in Khadi, had few personal belongings and craved no luxury of any kind. He was a nationalist and aligned with the Congress during the freedom struggles. He was also a close associate of K. Kamaraj, the former Chief Minister of Tamil Nadu.

He served as an Honorary Presidency Magistrate for eight years. He was also appointed as Jail Visitor by the Government of Tamil Nadu for six years.

Manicklalji was a businessman who ran a pharmacy and was also a financier. Yet, his primary interest was in social and humanitarian work. He was deeply concerned about the quality of education in India, which inspired him to become an advocate for education. In his public speeches, he often spoke of the importance and need of education for women, in particular.

He was an active member of more than 30 social service organizations, even serving on the Board of Directors of the Mylapore Academy for 45 years. He was actively involved in S.S. Jain Educational Society;
served as managing committee member in A.M. Jain College; and was also Correspondent of A.G. Jain Higher Secondary School.

Along with his wife, Ratni Bai, he was a caring and attentive parent to his eight sons and five daughters. Multiple handwritten letters, preserved to this day in the family’s archives, clearly articulate his dedication and commitment to the cause of education. At home, he was one of the rare patriarchs of his time, and in his
community, to discontinue the purdah system.

His wife Ratni Bai is presently living in Mandaveli. At 97, she is alert and reasonably active, with an excellent memory and unfading charm.