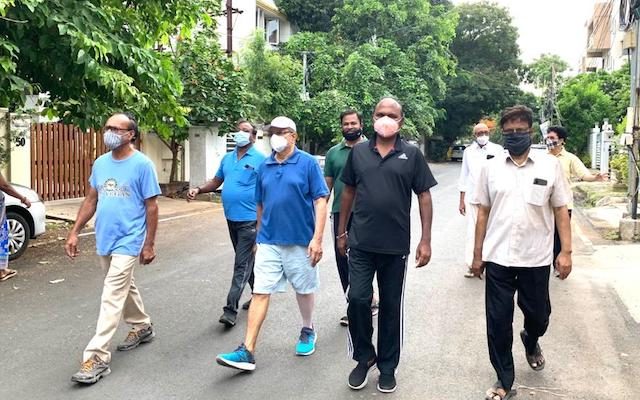 Mylapore MLA Dha Velu has been meeting up with representatives of various residents associations’ to listen to their worrying civic issues and suggestions and share his plans.

On July 29, Velu chose to take a walk with the members of Raja Annamalaipuram Residents’ Association (RAPRA) 7.30 am onwards.

The MLA and some Association members walked into First Main Road from Third Cross Street junction discussing the various issues plaguing the area.

The MLA met the residents of Vasanth Apartments and they requested him to redress the perennial problem of flooding that takes place here in the. monsoon season.

“The whole streets gets flooded even after a 30-minute spell of rain,. So much so water enters many houses” said a RAPRA leader. “The drain is either too narrow to channel all the water or it is blocked in many places or some parts of it have collapsed.”

The MLA was also shown, on the busy Third Cross Street the poor state of the storm water drain which is badly damaged with gaping holes everywhere.

Said one RAPRA member. ” These openings pose a big danger since there is a big stream of people who come to the ration shops located here.”

RAPRA members say that the MLA has promised to take action on the key issues.