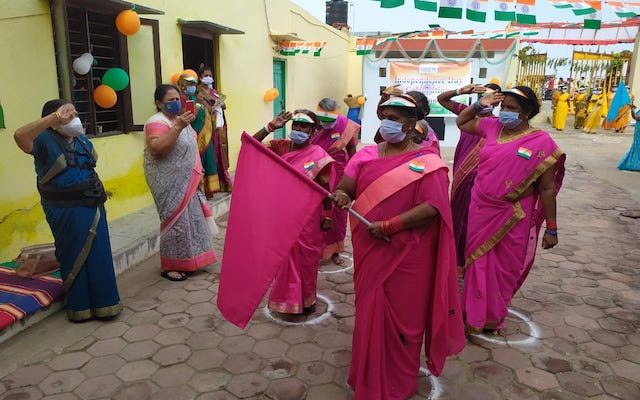 This was an Independence Day event that was wholly presented by senior women of the kuppams of the Marina. And it was hosted at the Dignity Foundation’s Daycare Centre in Mullima Nagar on August 17.

The chief guests for the programme were Sundera Gopalan, secretary, Lions Club of Mudra and Durga Bala, president of this Club.

A batch of the women held a snappy march past. The seniors were divided into three groups and each group had a leader who held a flag and led the group.

Members also took part in a special drill that was limited to their ability.  Arockiamary Sasichanandam welcomed everyone with her dance to the song ‘Aduvomey palli Paduvomey’. There was also a mime show by the seniors.

Seniors of this zone meet daily at this centre, a space belonging to the local kuppam to engage in skills training and activities that keep them engaged and encourages fellowship.