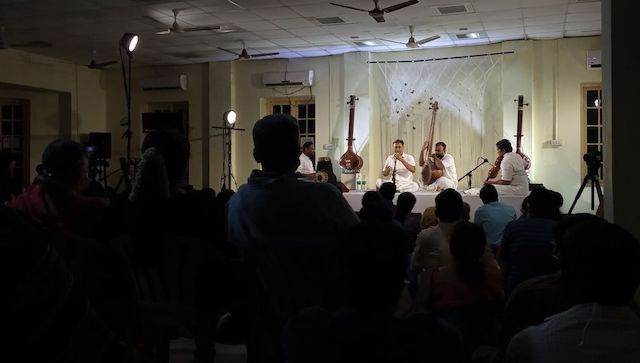 Carnatic music artiste Sanjay Subrahmanyan had his second concert after his 18 months break due to the pandemic, at Srinivasa Sastri Hall in Luz on Friday.

And the privately-curated show that was ticketed, got a houseful attendance.

The hall has always been a great venue for concerts and it holds memories of the masters of yore performing here: for Sanjay’s concert, the curators designed and lit up the intimate space well besides using the best audio systems.

Sanjay, who has been reinventing himself in the digital space lately, aided by curator and producer Bhargavii Mani puts out his songs list for every concert and a teaser note or video too. Plus, the October concert at Medai, a new space in Alwarpet and this one were ticketed.

Rasikas have already begun to post snide remarks on the stiff ticket prices, one saying ‘this is now you alienate rasikas of Carnatic music’ but for Sanjay, who is regarded as one of the top-notch artistes of this era and also has a huge fan following, tickets are sold out quickly.

Sanjay says that the last time he sang at Sastri Hall was in 2014. ‘Srinivasa Sastri Hall, located on the first floor of the Ranade Library in Luz in Chennai is one of the most hallowed Carnatic music venues….’, he noted then in his blog. You can read Sanjay’s full note shared on his FB –  here https://www.facebook.com/sanjaysubmusic/