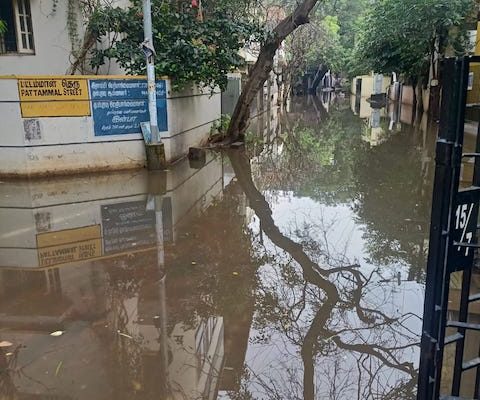 A civic-conscious group residing in Thiruvalluvarpet is asking Mylapore’s MLA Dha Velu to study the area’s serious water-logging problem and the studies it has done to address this issue so that they are saved the pains that they suffer at monsoon time.

The leaders of the community met the MLA recently at his office, handed over a thick file and the request and they say the MLA promised action from Chennai Corporation engineers.

The engineers overseeing the area did react – but instead of discussing the issue with Thiruvalluvarpet community, it seems they conversed with the association of neighbouring Jeth Nagar.

So Thiruvalluvarpet residents are disheartened at this response but they say they will battle it out.

The pettai seems to suffer solely because of unplanned urbanisation.

A small canal that carried floodwaters locally was built-up as a street. The streets and roads around this area, as in Jeth Nagar, as well as private development stand at a higher plane – so, during the monsoon, flood waters run into this pettai’s streets, and flood even the houses here, as the photos shot during the last year’s monsoon show. 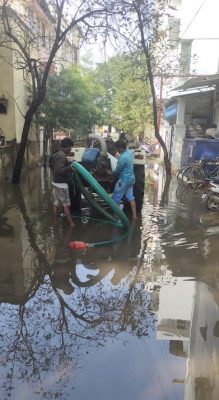 Some 50/60 houses which were built some 25/30 years ago get badly affected, while the rest having built have on a higher plane have not been affected.

Sailapathy, a resident and engineer says that the best and sensible solution to their long standing problem is to build culverts under Devanathan Street and under Venkata Krishnan Road that will link up with the existing storm water drains.

“This will force the floodwater to flow out of our area, flow south and perhaps empty into the Adyar river,” he explains. ” Right now, all this water runs into our area.”

He says that when GCC contracted workers were pumping out during the monsoon from flooded areas off Jeth Nagar, it ran northwards into Thiruvalluvarpet. “Nobody seems to care about the ground situation and how best to address solutions,” says a lawyer resident.

The community points out to the Police CID Quarters off Venkata Krishna Road, saying that layout is lower than the roads and so hold all the rainwater and floods and pumping it out only messes up colonies on the north side.

He says when GCC engineers were shown data and maps and briefed on the need for culverts, the engineers told the community’s reps that culverts cannot be built under busy bus route roads (BRR) for they cannot take the load. No alternate plan was given by GCC.

Clearly, localised, for-the-day civic solutions by GCC has put Thiruvalluvarpet at a disadvantage.

And going by the steps taken by GCC engineers locally, there seems little indication that they are willing to look at the bigger picture for a better solution. Perhaps, as one resident said a meeting with the GCC zone officer alone can move solutions.