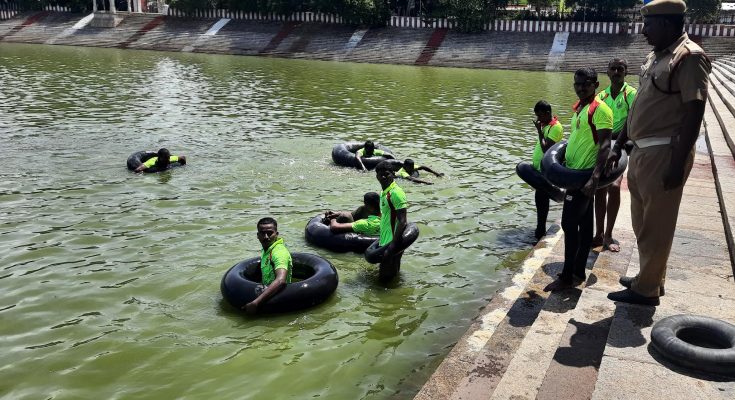 Over 120 life saving personnel and 10 rubber boats will be involved in this exercise.

A rehearsal took place at the tank on Monday under the supervision of M. Subramanian, ADFO (Asst District Fire Officer).

On Tuesday, the personnel will be trained on the use of life jackets and the art of rescue during flooding in the rivers. The personnel will also train on ways to handle building collapses during the monsoon.

A fire engine specifically equipped for emergency rescue purposes will be stationed here on Tuesday. This vehicle will have special lighting inside.

Subramanian told Mylapore Times that the exercise is also meant as a public education exercise on how to safeguard oneself during the monsoon and on days of flooding.

He said that the general public can use thermocol, empty LPG cylinders, drums, cans and even cycle tubes as rescue equipment during monsoon emergencies.

He said that it was normal for snakes to come out during the monsoon and that there will be snake catching equipment to train the personnel to trap snakes in cases of SOS calls.

There will also be other life saving equipments on display tomorrow at the west end of the Kapali tank.