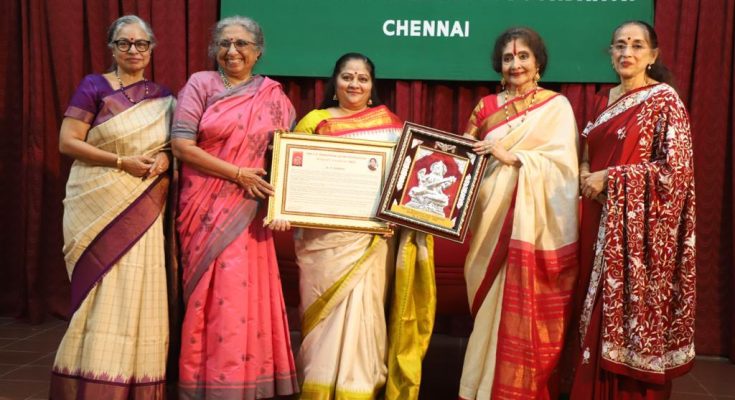 The C.P. Ramaswami Aiyar Foundation conferred the Saraswathi Puraskaram award for 2022 on S. Sowmya for her contribution to Carnatic music.

S. Sowmya, currently the Vice Chancellor of the Tamil Nadu Dr. J. Jayalalithaa Music and Fine Arts University and a visiting professor at The Music Academy, Madras, is one of the leading exponents of the Carnatic vocal music. She is the recipient of several prestigious awards and titles, including the Sangita Kalanidhi in 2019 from The Music Academy Madras.

Dr Nanditha gave some backgrounder to the award and the music heritage of this campus here off Eldams Road.

The Saraswathi Puraskaram has been instituted in honour of Saraswathi Pattabhiraman who, along with her husband C. R. Pattabhiraman, donated the ancestral family property of “The Grove” situated on No.1, Eldams Road in Alwarpet to the C. P. Ramaswami Aiyar Foundation.

An accomplished musician, Saraswathi Pattabhiraman played six instruments: veena, violin, mridangam, harmonium, flute and piano. She was trained in Western and Indian classical music. In 1977, she collected and published a book of traditional music for weddings, festivals and important events, titled Gowri Kalyana Vaibhogame (published by LIFCO), which she set to classical notes.

The Grove, the building where the Foundation is situated, was once a lively centre of music. Great vidwans of Carnatic music had performed here for the benefit of C.P. Ramaswami Aiyar and his guests. Muthiah Bhagavathar taught C.P. ‘s granddaughter; T. Mukta ammal taught  hererare padams and javalis in the 1970s; and many great musicians have performed in the Foundation’s famous kalyana koodam.