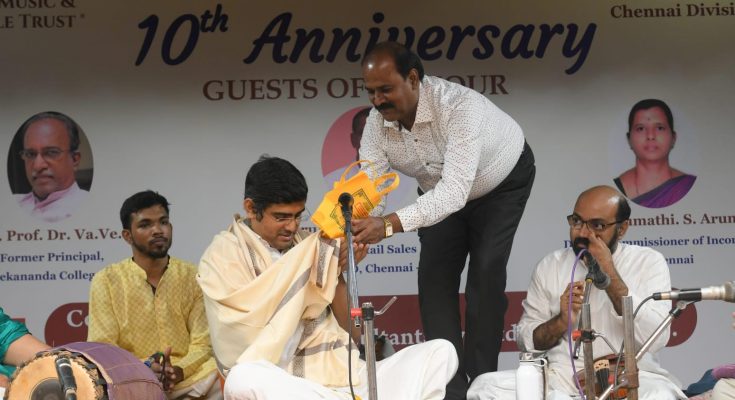 There was a surprise planned at the end of vocalist Sikkil Gurucharan’s November 26 concert held at the TAG Dakshinamurthy auditorium in P. S. School campus Mylapore.

Rasikas took home not only the memory of the music but also some Arcot Chettiyar Mittai Kadai Makkan Peda, given free to rasikas at the concert.

“I want the wonderful tradition of sangeetham to reach the youth of today. I want to actively contribute my bit. Our concerts are free  and open to all.”

Vijayaraghavan says he started the Archana Trust, now ten years old, in memory of his daughter.

“Mridangist Tiruvarur Bhaktvatsalam is our chief advisor and more or less a constant at our concerts, he said. Prior to this, Vijayaraghavan was the secretary of the Amrutavarshini Sangeeta Sabha in Ranipet.

As an organiser, Vijayaraghavan takes the music to old-age homes such as Kanchi Matham’s vriddhashram in Kalavai.  “The concerts are organised here  so that  our elders need not be deprived of something they love only because of their inability to go to a concert.”

A businessman for fifty-plus years, this Arcot native also wanted to perpetuate the taste and flavour of the famous Arcot Makkan Pedha.

“Tirunelveli and halwa go together. So do Arcot and Makkan Pedha.” Thus was launched the practice of distributing the Makkan Pedha after every concert hosted by Archana Trust.  The sweets are sponsored by P. D. Sundaram Chettiyar.